The D-type cylinders with the capacity of over 45 liters are usually used in hospitals environment while the smaller B Type (up to 10.2 Liters) are used for individuals. 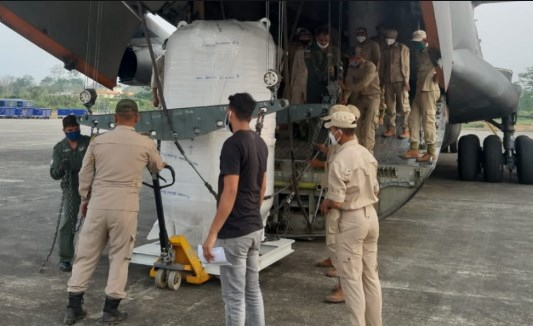 Kohima: The state of Nagaland got a total of 1200 oxygen cylinders, consignment consisting of 400 jumbo (D type) and 800 B-Type oxygen cylinders for its three Pressure Swing Adsorption (PSA) Oxygen Generation Plants, one of which already commissioned in Kohima.

According to official sources, the consignment of oxygen cylinders were transported from Ahmadabad (Gujarat) via Jorhat (Assam) by the Indian Air Force logistics plane, which they were brought to Dimapur by road last evening and stored at the State depot for oxygen cylinders of Nagaland Police Complex in Chumukedima near Dimapur.

The D-type cylinders with the capacity of over 45 liters are usually used in hospitals environment while the smaller B Type (up to 10.2 Liters) are used for individuals. Oxygen cylinders are categorised as types A to H and the size and capacity increases in ascending order, A-type being the smallest and H-type being the biggest.

It may be mentioned here that the Centre had announced for installation of 551 ‘dedicated Pressure Swing Adsorption (PSA) Medical Oxygen Generation Plants inside public health facilities in the country,’ under PM CARES (Prime Minister’s Citizen Assistance and Relief in Emergency Situations) Fund in the District Hospitals of Kohima, Dimapur and Mokokchung, out of which the Kohima Oxygen plant was commissioned by Nagaland Minister of Health and Family Welfare S. Pangyu Phom at the Naga Hospital Authority on May 17 last with a capacity of 1000 Liter Per Minute. The Oxygen plant at Dimapur also ready for commissioning soon, while the plant in Mokokchung still under construction.

Meanwhile, the equipment for plants in Phek and Tuensang are funded under a joint collaboration of the United Nations Development Programme (UNDP) and Government of Japan. Under the collaboration, eight PSA oxygen generation plants are being installed in Meghalaya, Nagaland and Tripura. The equipment for the oxygen plant at Phek have reached Phek on Thursday last, report said.