The apprehended individuals along with recovered items have been handed over to Forest Department in Dimapur for further investigation. 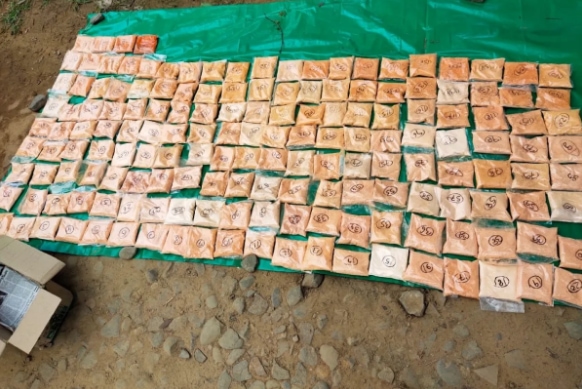 Kohima: The Excise personnel of Kohima manning the Excise Check gate at Peducha has seized about 400 grams of suspected heroin from a vehicle and the seized items were worth of
Rs. 45 Lakh.

According to a release issued by the Excise Department on Sunday, the Excise duty party was conducting normal checking and was signalled for the vehicle to stop, but defying the order to stop it sped away towards Dimapur. The Excise team gave hot pursuit and the vehicle was stopped and searched and the team recovered 400 grams of suspected heroin which were neatly packed inside 40 soap cases and concealed with a sack of vegetables.

One person was arrested in this connection and a case has been registered under the Narcotic Drugs and Psychotropic Substances Act, 1985, which is under active investigation, sources said.

In a separate case, according to a release the PRO of Head Quarters if Inspector General of Assam Rifles (North) said based on specific information, in a joint operation of Security Forces and State Police recovered illegal Burmese teak worth approx Rs 74 Lakh at general area Lengrijan under Dimapur district on November 15.

The apprehended individuals along with recovered items have been handed over to Forest Department in Dimapur for further investigation.