A ceasefire has been in place between the political groups and the government of India for over 25 years. 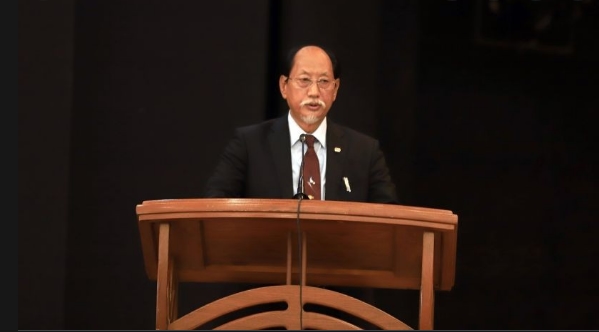 Kohima: Nagaland Chief Minister Neiphiu Rio has appealed to private investors and firms to set up projects in the state in focus areas like agro-based industries, medical education, hospitality, and the tourism sector/

The conclave was themed ‘Partnerships for Strengthening Sustainable Development’ under the aegis of the Investment and Development Authority of Nagaland (IDAN).

Rio said, “We also have many vibrant entrepreneurs and start-ups who would immensely benefit from the scale and expertise that can be offered by large corporates for win-win collaborations that would take the state to greater heights of prosperity.”

On the canceled scheduled visit to the state of Union Finance Minister Nirmala Sitharaman, he said ‘she had conveyed to him that she would combat the earliest.’

Citing the partial lifting of the controversial Armed Forces (Special Powers) Act (AFSPA) in several parts of Nagaland, Rio told investors that the law and order situation should not be the reason for not investing in the state as the state is ‘peaceful.’

The AFSPA, which was in force in Nagaland since 1958, was revoked from 15 of the 72 police station areas in the state, with effect from April 1. He said the insurgency and law and order in the state, in the past, had prevented investors from coming to Nagaland and expressed hope that the Naga political issue will be resolved soon.

A ceasefire has been in place between the political groups and the government of India for over 25 years. He informed that the state is very peaceful and incidents of crime are a lot fewer than in other parts of the country.

Rio also requested the corporates to build a long-term relationship with Nagaland so that it not only ensures the successful operation of CSR projects but also helps integrate local businesses with the national supply chains.

Rio further highlighted some of the development challenges in the state and said remoteness and geographical terrain, balancing sustainability and development concerns, make it challenging for ensuring last-mile public service delivery, particularly in the health and education sectors in the state. This is where companies with their resources and expertise can help the state in designing, developing, and delivering innovative solutions with the use of advanced technology, he added.

The Project Head Her & Now, GiZ Julia Karst made a presentation on policy on women entrepreneurship. She said that GiZ has joined IDAN to promote women entrepreneurs in Nagaland. She also shared five key policy recommendations, like enabling the women to assess finance, making their presence on industry platforms, enhancing digitalization literacy, and others.