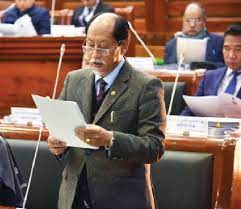 In his Budget speech, Rio stated that the agenda of the State Government is the early resolution of the Indo-Naga political issue. he said the House has passed a number of resolutions over the years.

Consultative meetings were held with all stakeholders on October 15, last year and again on March 9, 2022. On September 18 last, all the political parties represented in the Nagaland Legislative Assembly came together to form the UDA and all the 60 members of the House are now united with the single objective of working for a solution to the Naga issue.

While appreciating the constant contributions of the mass-based Civil Societies, Tribal Hohos, Church organisations and NGOs in the search for peace, Rio appealed to all sections to rededicate to the cause of unity, oneness, understanding and true peace.

Rio said for the past two years, the State has grappled with Covid19, and despite the difficult times, the last few months have shown a substantial turnaround in the economy.

The Chief Minister also said that funds have been provided to set up a 5 MW solar plant under the Department of New & Renewable Energy. In the private sector, the 20 MW solar power project in Ganeshnagar is expected to be fully operational during the year.

The New & Renewable Energy sector has also been provided Rs. 2 crore for solar street lights and core activities. Rs. 50 Lakh has been provided to the Electrical Inspectorate for Green Village Initiative.