He urged the negotiating parties to “expedite the negotiations” so as to secure an early solution, which was the desire of the people. 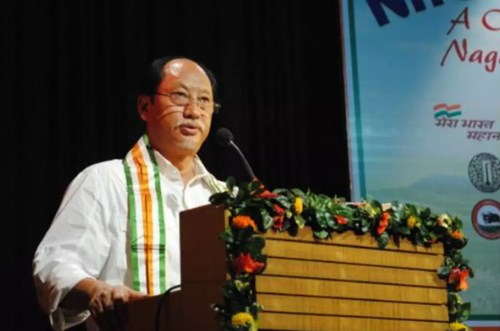 Kohima: Nagaland Chief Minister Neiphiu Rio on Wednesday said the elected members of the Assembly have risen above party affiliations to facilitate the peace process for an early solution to Nagaland political issue.

Addressing the thanksgiving service to mark the election of PDA consensus candidate H. Chuba Chang, who was declared elected unopposed for the by-election to the Noksen Assembly Constituency under Tuensang district, at the State Banquet Hall in Kohima yesterday, Rio informed that his Government has emphasised on putting all efforts to ensure that solution to the Naga political issue was secured during current rule of the present People Democratic Alliance (PDA) Government. He also disclosed that during his recent visit to Delhi, he had productive meetings with Central leaders and discussed the dynamics of PDA and the road ahead.

He urged the negotiating parties to “expedite the negotiations” so as to secure an early solution, which was the desire of the people. Rio said this was also emphasised at the recent meetings with Naga National Political Parties (NNPGs) and NSCN (I-M) leaders in Delhi.

Rio thanked coalition partner, the BJP for its unstinted support and positively contributing to the collective victory. Further, Rio also acknowledged the support of Prime Minister Narendra Modi, Union home minister Amit Shah and BJP national President J P Nadda. He also said the ruling PDA was a combination of experience and youth and hoped that Chang’s vast experience would be an asset to all and also assured the newly elected legislator of collective support.

Nagaland Deputy Chief Minister Y Patton and BJP legislature leader, in his address described the occasion as “red letter day” for the PDA and expressed gratitude to people of Noksen for sending his former colleague, a former bureaucrat and veteran politician to Nagaland Legislative Assembly unopposed. Patton said it signified that the BJP-NDPP alliance was doing a good job in winning the confidence of people under the dynamic and visionary leadership of Rio. He reiterated that the Government was committed to good governance and all-round development of the State.

Winning candidate H. Chuba Chang thanked the PDA for having reposed confidence on him by fielding him as consensus candidate in spite of the fact that there were many other aspirants. He also thanked the people of his Noksen Assembly Constituency for the support extended to him and assured to uphold the party’s manifesto and strengthen it.