Must put our heart and soul to eliminate the drug menace: Najma Heptulla

Manipur Governor drew attention to the present alarming situation among the youths in the State of drug addiction and AIDS. 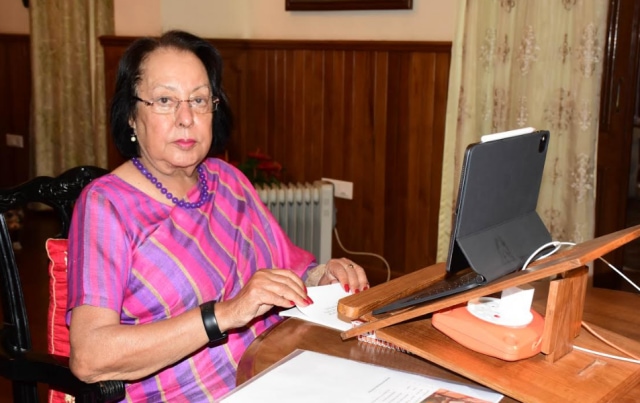 Imphal: Manipur Governor, Dr Najma Heptulla addressed the inaugural session of the two-day online interactive initiative of the United Nations Office of Drugs and Crime (UNODC) on Monday. In her speech, Dr Heptulla recollected the International Workshop, organized at Imphal in September-October, 2019. She lauded the contribution made by the United Nations Office on Drugs and Crime (UNODC), Regional Office for South Asia to counter the challenges posed by drugs, crime, corruption and terrorism and to promote the rule of law and justice.

Dr Heptulla drew attention to the present alarming situation among the youths in the State of drug addiction and AIDS. Despite the relentless endeavour of the state government to control this dreaded disease, the number of HIV and AIDS infected persons has been increasing unabated, she added. She at the same time, expressed great satisfaction with the fact that various Voluntary Health Organizations and Civil Society Organizations have been educating the people about the disease.

She also reiterated the words of Prime Minister, Narendra Modi, who while speaking in 2019 on the campaign for drug free India, said that in addition to the health problems and destruction of families due to substance abuse, the narcotics trade is a great threat to the safety and security of the country.  He added that narcotics trade is one of the biggest sources of income for terrorists and anti-national elements and the money sourced by these elements through drugs trade is used to destabilize the nation. Dr Heptulla further stated that it is mandated on the Central Government, State Governments, Inter-Government, Legislators and Civil Society Organizations “to put our heart and soul to eliminate this evil”. “ In order to combat this menace,   Government of Manipur has taken various steps to enact laws so that those people who involve in these drugs and narcotics trade will be awarded exemplary punishment”, she added.

“Besides conducting authentic studies on the drug situation in the North East, I suggested the UNODC during the International Workshop held at Imphal  to convene and conduct training and capacity building of Law Enforcing Agencies of all the six countries under the Regional Office, for, all the representatives from all six countries were present during the Workshop. I am fully confident that UNODC might have already chalked out the programmes accordingly.  In addition, I also suggested a robust intelligence gathering and intelligence sharing system to implement any crime prevention strategy,” she continued.

In her address, she also emphasized the need to facilitate a better crop replacement to wean away farmers from poppy and cannabis cultivation. Dr Heptulla also called for family skills training and interventions “to prevent negative social outcomes which would not only add to the National Human Capital but would also provide a sustainable solution to the problem”.

“For the first time in Manipur, in a significant development, villagers of Paoyi in Ukhrul District voluntarily destroyed poppy plantation in the village for giving a boost to the State’s war on drugs.  In recognition of the sentiments and gestures of the villagers, Chief Minister of Manipur announced a reward of Rs. 10 lakh for the villagers. I encourage the action of the villagers”, she added.

Dr Heptulla expressed confidence that during the 2-day online Interactive Capacity Building Initiative eminent personalities including the representatives of UNODC, South Asia as well as delegates of South Asia will explore ways and means to eliminate these evils forever. “The intellectual pursuits of the participants of this Initiative should be followed by a mass campaign to arouse the awareness of the evils of drugs” she said while extending her fullest support to this laudable initiative of UNODC.