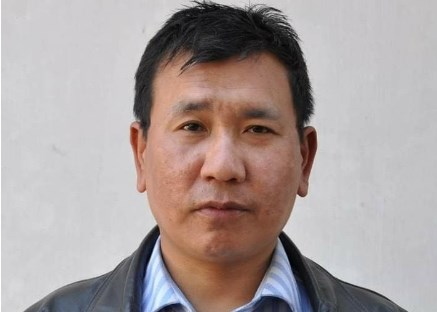 Maipak, a resident of Sagolband Salam Leikai, succumbed to post-Covid complication at the early hours of Wednesday after battling the virus at Raj Medicity since 4th May 2021. He is survived by his wife and two kids, a girl (14) and a boy (11).

With this fatality, the film fraternity of Manipur has lost four its personalities to the oingoing pandemic, the other three victims being Moirangthem Kamaljeet Singh, aka Ern Kay Jeet, Director-Producer-Lyricist, Sagolsem Romio Meitei, a rising actor from Kairmbikhok, Wangjing and Hem Athokpam, cinematographer-editor.

In a spontaneous, virtual condolence assembly, members of MSFDS’s Executive Board and the Celebration Committee of the Golden Jubilee of Manipuri Cinema expressed shock on the sudden passing of Irom Maipalc who was also an important employee of MSFDS as a cameraman.

Art & Culture Commission, M. Joy Singh shared his profound sorrow and said the void created by Maipak’s demise would be hard to fill up for MSFDS as well as for the entire film fraternity of Manipur. Ng. Uttam Singh, director, Art & Culture while sharing his grief praised Maipak for his incredible cinematography that distinguished him as cinematographer par excellence.

Sunzu Bachaspatimayum, MSFDS Secretary, who had worked with Maipak on ‘Monpas of Arunachal Pradesh’, the ethnographic documentary for which Maipak was adjudged the Best Cinematographer (documentary) at the 49th National Film Awards, 2002, said Maipak is known for his uncompromising framing even in difficult and uncontrolled situations. Sunzu recalled that Maipak would not take a shot until the framing was perfect, a quality of a professional to the bone.

Acclaimed filmmaker Oken Amakcham lamented Maipak’s passing. He said it would be difficult to find a replacement for Maipak. Oken had collaborated with Maipak on his films namely, Cheina, Thajabagi Wangmada, Nangtana Helli, Tellanqa Mamei, Amamba Lambi, “Ratan Thiyam – The Man of Theatre and The Theatre Incarnate. Many of these films were distinct by lucid camera works.

Other members of the Board who were present at the virtual meet also shared their grief and offered their condolences to the bereaved family. Filmmaker Makhongmani Mongsaba said he is speechless by the sad news. Film Forum President. Samjetsabam Mangoljao said Manipuri cinema lost one of its stars. Manipuri Cinema heavyweight Laimayum Surjakanta said Maipak was a quality-conscious cinematographer who never compromised with his work. Haobam Ronel who closely worked with Maipak said Maipak’s passing is a huge personal loss. Robin Wahengbam, an acclaimed fine artiste and a childhood friend of Maipak said Irom Maipak was a deep thinker, a compassionate artiste with a sense of humour.

Haobam Paban Kumar, who has collaborated with Maipak in several of his award-winning films like Phum Shang, Mr. India, Nupishabi and Kangla said, “I’ve lost a good human being, an artiste and a friend.” Further, Paban said that many of his films won’t have been possible without Maipak and added, “Tomo Maipak is born genius. Camera was in his blood. He had magic in his hands. He was a wonder in uncontrollable situation.”

As decided at the condolence meeting, candle lights were offered in the loving memories of from Maipak as well as of Em Kay Jeet Sagolsem, Romio Meitei and Hem Athokpam at the newly erected Memorial for Manipuri Cinema at the MSFDS complex at Palace Gate, Imphal maintaining Covid appropriate SOP.

International award-winning filmmaker Amar Maibam said the Manipur film industry has lost a bright star who had so much potential. He was one of the most senior and best cinematographers who worked with many veteran filmmakers including Aribam Shyam Sharm.