Modi destroys economy of this country – from note bandi to bank bandi: Mamata

Addressing a public meeting here, the TMC supremo said, “The battle will be inch by inch, you have to protect EVM. Press the button in such a way that BJP gets bowled out.” 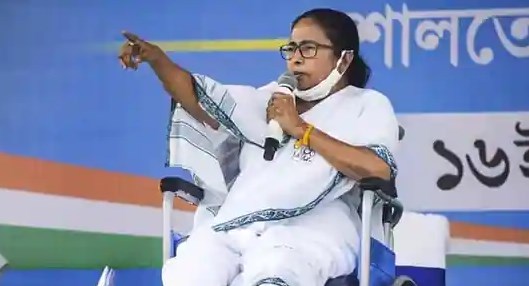 They will soon say to sell Haldia port, Banerjee said.

Addressing a public meeting here, the TMC supremo said, “The battle will be inch by inch, you have to protect EVM. Press the button in such a way that BJP gets bowled out.”

“Suvendu Adhikari went to BJP to save his money, who is a bigger tolabaj?’ she asked.

“Who can be a bigger tolabaj than him? He has now gone to BJP to save all his money. I’m happy he is gone. Good riddance,” she said.

“Keep in mind this is not the Lok Sabha election, this is the state election and I’m your candidate in all 294 seats,” the TMC supremo said.

Earlier on Friday in a public meeting at Tamlik in the East Midnapore district, the chief minister said that the results of the upcoming West Bengal assembly elections 2021 will decide the fate of BJP leaders like Narendra Modi and Amit Shah in 2024 Lok Sabha polls.

“We have to unite against these evil forces. They came to Bengal to divide us. You voted for BJP (in 2019 Lok Sabha) and they cheated you. They gave you nothing,” Banerjee said.

The TMC supremo said that she had blindly supported Adhikari when he was in the TMC.

“I blindly supported him. My care towards him was blind. But now I will not tolerate it any more. No place for ‘gaddar’ (traitor). No place for ‘Mir Jafar’,” Banerjee said.

“We will not leave an inch to him and any opposition candidates in any seats in Bengal,” she said.

The chief minister said, “I will not allow it (NRC and NPR) to happen here in Bengal. I will do everything to protect the people of my state, as long as I am alive.”

“To ensure higher education to all eligible students, I will launch a new ‘Student Credit Card’ soon. This credit card will have a credit limit of Rs 10 lakh with an interest rate of only 4 per cent, with a provision of easy repayment so that students do not have to depend upon their parents to continue their studies,” the chief minister said.

The TMC supremo said, “I would like to tell my brothers and sisters that don’t look at the candidates. Look at my TMC symbol and vote for me. If they don’t vote for TMC, then Bengal will be divided and people will not live in peace.”