Moved by their sad plight, Vanlalvena said he would take up their complaints to the Home Minister 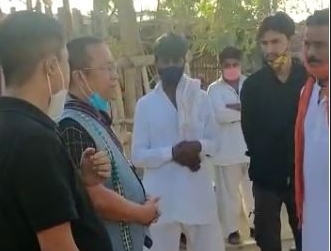 Aizawl: Mizoram Rajya Sabha Member K Vanlalvena visited Pakistani Hindu refugees in Jahangirpuri colony on the bank of Yamuna river in North Delhi last Saturday and interacted with them about their living conditions.

He was accompanied by Special Police Force for NE Region.

A large number of Hindu families left Pakistan about nine years back and migrated to India with hope of finding better life in their new home.

In about 4 acres of land provided by the Government of India, 170 families, around 1500 in total, are living in shanties without proper amenities for a number of years. Moved by their sad plight, Vanlalvena said he would take up their complaints to the Home Minister.