As part of the Lakadong Mission, the Chief Minister handed over turmeric washer and polisher machines to four Lakadong Farming Societies identified by the Meghalaya Farmers’ (Empowerment) Commission. 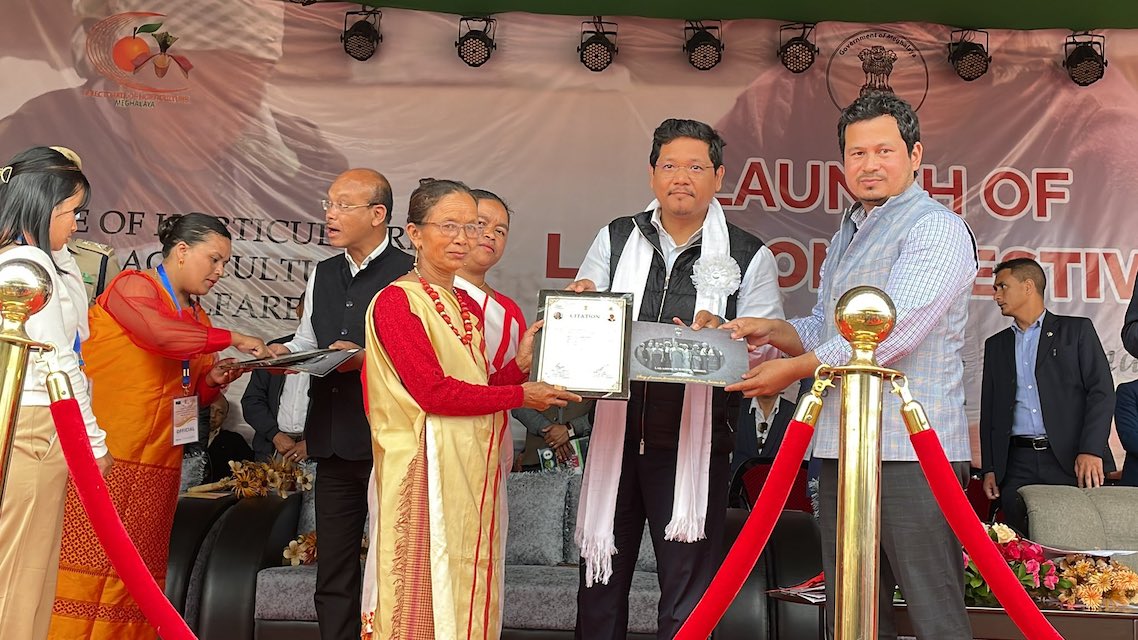 Jowai (Meghalaya): Meghalaya Chief Minister Conrad K. Sangma on Tuesday said the government has started extraction of curcumin from turmeric, for the first time in the entire Northeast.

He said the process of extraction is ‘indigenous’ and in the near future better technology will be introduced, which has global acceptability.
“Government will get the best standard equipment and ensure that the product from Meghalaya finds its market globally,” the Chief Minister said at Lakadong Festival, which is being held for the first time at Laskein in West Jaintia Hills district.

As part of the Lakadong Mission, the Chief Minister handed over turmeric washer and polisher machines to four Lakadong Farming Societies identified by the Meghalaya Farmers’ (Empowerment) Commission.

He also inaugurated the Collective Marketing Centres at Thadmuthlong, Shangpung and Laskein Mowtyrshiah under the Lakadong Mission.
The Chief Minister was accompanied by Commissioner & Secretary, Agriculture & Farmers’ Welfare and K N Kumar, Chairman, Meghalaya Farmers Empowerment Commission, amongst other officials from the department of Agriculture and Farmer’s Welfare.

He further said in the last few years, the government has endeavoured to shift the goal of the department to a much broader goal which is the farmers’ welfare by increasing production and thereby increasing income.

“Therefore, we realised that the Lakadong turmeric requires a mission mode approach and focusing on the entire value chain that starts with giving the seeds to the farmers, training them on how to take care of the product, helping them in processing, packaging and marketing. It is all these steps that matter for the farmer and the government’s job is to ensure that we see the entire spectrum and help the farmer,” the Chief Minister said.

He further said when Meghalaya celebrates its diamond jubilee, the State should be in the list of top 10 states in the entire country in terms of its GSDP. “We have a plan and a strategy for achieving our targets and we will work collectively to ensure that we achieve our goals in ensuring that our people reap its benefits,” he added.

Agriculture is the main source of livelihood for people in Meghalaya and the sector contributes 22 percent of GSDP.

Expressing happiness that the State has its own curcumin content testing unit, the Chief Minister said, “There was a time when the curcumin content had to be measured in Kolkata and would take ten days but today we did it in ten minutes out here.”

He further said the government would take the curcumin testing further by ensuring better technology and standards which will be acceptable globally.
Meanwhile, the Chief Minister also said that the programme will be replicated throughout the state for other food products.

“Programmes like this have potential for Agro Tourism and that is also one of the purposes of having this festival and why we call it the Lakadong Festival and not just a Lakadong conference is because we feel that we need to celebrate this product that we have been blessed with and should be proud of so therefore it’s something we must celebrate and ensure that we are able to take this forward,” he said.