Rikmenlang Lamare, the jail-breaker was captured from Chiabnai village in West Jaintia Hills district by members of Village Defence Party 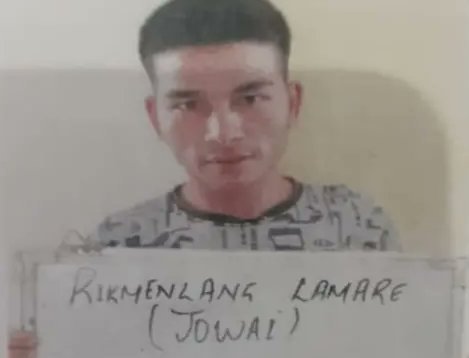 Shillong: Another under-trial prisoner (UTP), who had escaped along with five inmates from the Jowai district jail and correctional home, was re-arrested on Tuesday by Meghalaya police.

Rikmenlang Lamare, the jail-breaker was captured from Chiabnai village in West Jaintia Hills district by members of Village Defence Party, and was handed over to the police, the district superintendent of police, West Garo Hills district, Bikram D. Marak said.

On Monday, police rearrested Ramesh Dkhar, who was also among six UTPs who had escaped the jail on Saturday.

Both Dkhar and Lamare had managed to flee from the mob lynching in Shangpung on Sunday, where four others were killed.

On Sunday, Four prisoners I Love You Talang, Shidorki Dkhar, Lodestar Tang and Marsanki Tariang (murder convict) were lynched by a mob of over 5000 from different villages.

I Love You Talang was recently arrested by police in a twin murder case, while Marsanki Tariang had been convicted by the court for killing his wife by setting her on fire on March 19, 2015.

On the other hand, the family members of I Love You Talang has refused to take over his dead body for the last rites.

“The family members of I Love You Talang have given a written statement informing the district authorities not to claim and accept his dead body after he was allegedly involved in the brutal murder of two cab drivers,” Marak said.

“We have given two days time to the family members to come and collect the body and if they fail to do so we will approach the court for disposing the bodies,” the police official said.