The discussion was raised on a report alleging that the Animal Husbandry & Veterinary department has no knowledge about the destination of the cattle whereas it has issued over 290 challans to buy cattle from Assam. 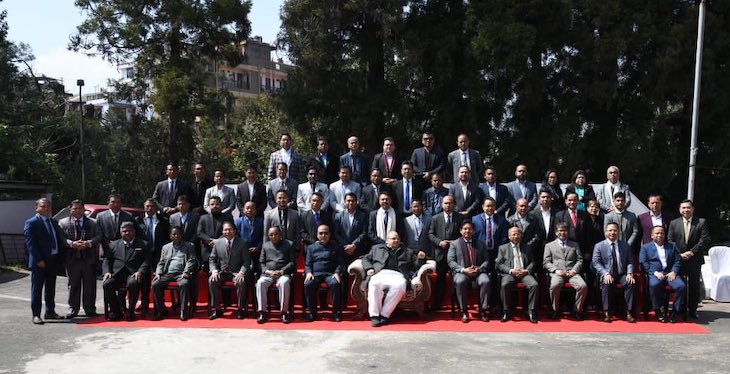 Shillong: The Opposition Trinamool Congress on Monday accused the Meghalaya Democratic Alliance (MDA) government of ensuring that the BJP’s “hidden agenda” of stopping people in Meghalaya from eating beef is successful.

“Not only cattle smuggling has become a livelihood for many but now the danger is that raw meat is also being smuggled as beef. This is the latest information that has come from the market through channels that cannot be detected by the State. Whether it is cattle or buffalo meat we don’t know, whether it is of a dead cattle or sick cattle that also we don’t know,” TMC legislator George B Lyngdoh said after moving a short duration discussion on beef quality and transportation of cattle on the second day of the Budget session today.

“We do not know the origin of the meat that is being smuggled to the state because the butchers do not get access to cattle. In spite of all the alerts that we have raised the health of citizens is also in danger,” he said and alleged that the cattle crisis in the state has been purposely created, perhaps to fulfill a political agenda of both the BJP government at the centre and the state.

“As we see, they are now successful in ensuring that Meghalaya does not get access to beef. The inaction of the state government proves beyond doubt that it is ensuring that the BJP succeeds in its plans,” he said.

The discussion was raised on a report alleging that the Animal Husbandry & Veterinary department has no knowledge about the destination of the cattle whereas it has issued over 290 challans to buy cattle from Assam. Lyngdoh further alleged that the state government was successful in ensuring that the cattle do not reach the state.

“The state government has been ensuring that whatever cattle that reaches the state, that also is being smuggled and whatever cattle reaches the open market for consumption, the prices are so high now that people cannot buy beef anymore because it is so costly,” the TMC legislator said.

“Therefore I can only congratulate the government for hoodwinking the people without a law being put in place. (Due to) its indifference and its cold attitude and inaction, it has been successful in ensuring that the hidden agenda of stopping people from eating beef is successful,” he added.

Supporting Lyngdoh’s short-duration discussion, another TMC legislator Himalaya Muktan Shangpliang said as per a study and based on the opinion of the butchers, beef has become costly considering Assam cattle law as there is a shortage of cattle in the state.

Process T Sawkmie, who is suspended along with other four Congress legislators for supporting the BJP-backed MDA government, admitted that the price of beef per kg ranges from Rs 400 to Rs 450 while the price of a small cow is Rs 20,000 the large one ranges from Rs 80,000 to Rs 90,000 Sawkmie also asked the government to check the trend of smuggling of raw beef in Shillong from Assam as the consumers do not know the quality of raw meat.

Animal Husbandry and Veterinary Minister Sanbor Shullai of the BJP, said that the department was setting up check posts in various entry and exit points of the state to check vehicles carrying cattle and to prevent unauthorized transportation and detection of smuggling.

“After the enactment of the new Cattle Prevention Act by the Assam government last year, he said the State government has taken immediate steps to ensure hassle free transport of cattle from other States to Meghalaya and prevent any kind of harassment to traders.

“A series of discussions with Assam Animal Husbandry and Veterinary Minister Atul Bora, (Assam government) officials and police officials were the held at various levels to sort out the problems faced by the legitimate cattle traders of Meghalaya,” Shullai informed.

He said department has issued 280 transit permits to genuine local traders, dairy cooperative societies and others and assured that the government would constantly monitor the issue and necessary interventions will be made if genuine cattle traders face any hurdle in transportation of cattle to Meghalaya.

Shullai informed that the government was procuring 5000 Ongole bull semen straws to expand the artificial insemination exercise in the state.

“With the introduction of Ongole bull and other exotic breed bull in the state, Meghalaya will become self-sufficient in meat production in a short span of time,” the BJP minister said, adding that the existing cattle population in the state is 9.5 lakh as per the 2019 livestock census and with this intervention, the government is hoping for an increase of at least 15 lakh in a short span of time.