He said that the entire NRLM team in the State have been working tirelessly with a sense of purpose to serve the people. 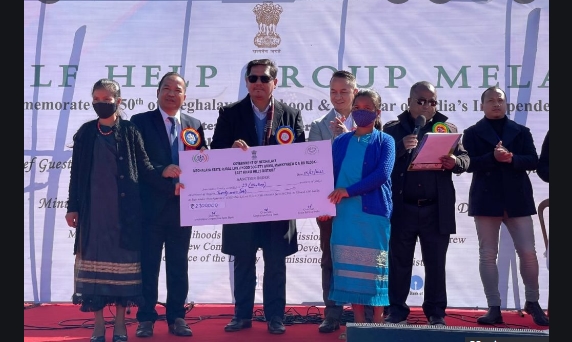 Shillong: Meghalaya Chief Minister Conrad K. Sangma on Wednesday said that the State Government is committed to creating a turnaround in the socio-economic condition of the rural population with an inclusive programme that promotes Self Help Group Movement (SHGs) and Farmers Collectives across the State.

“Our Government understands the importance of SHGs and how it can provide direct benefit to our women organisations. Through the National Rural Livelihood Mission (NRLM), we have been able to provide financial aid and support to thousands of SHGs in the last three years,” he said addressing SHG Mela at Rapleng village under Mawkynrew block in East Khasi Hills district.

He said that the entire NRLM team in the State have been working
tirelessly with a sense of purpose to serve the people.

“Today our SHGs are empowered and they are financially stable to expand their income-generating activities. We are supporting the groups through different welfare programmes under the mandate of NRLM,” the Chief Minister said.

During the SHG Mela, Sangma and Agriculture Minister Bantiedor Lyngdoh handed over appreciation certificates and cash rewards to villages, for their innovative and successful enterprises, which has
brought laurel to the villages under Mawkynrew block.

“Majority of our population are farmers in the State. Hence, as Government we deemed it fit that a special programme is launched for the farmers’ welfare. Through FOCUS we have been able to touch the lives of many rural farmers and aid them financially to upscale their enterprises,” the Chief Minister said.

Sangma also informed the gathering that the Government has accorded priority to upscale infrastructure development in the State and the last three years, huge investment has been made to boost road communication across the State.

“I am not saying that we have resolved every single issue or we have repaired every road in the State but this Government is determined to ensure that the momentum of development continues and benefits a large section of the society and the region as a whole,” he added.
During the SHG mela, the Chief Minister announced that all the 46 C&RD blocks in the State will get a facelift and new infrastructure will be put in place to ensure that the rural blocks function more effectively.
“We have sanctioned Rs. 3 cr each for every block office in the State, and the construction to upgrade the blocks will start next year,” he added.

He further informed that the Government has invested in upscale infrastructure in elementary schools as well as have invested to ramp up health facilities in the State.

He also launched the Market Outlet at Laitdiengsai under Mawkynrew C&RD Block, a project implemented in convergence with MGNREGS, NRLM & MBMA. The outlet will showcase the traditional indigenous products of the SHGs.