Black flags were spotted in several locations in Shillong, the capital city of Meghalaya in protest against the killing of Thangkhiew, during the Independence Day celebrations. 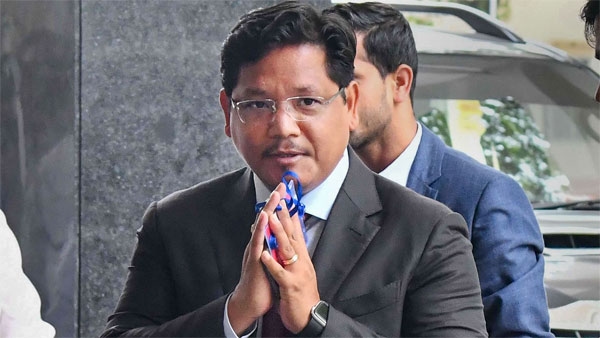 Shillong: Curfew was clamped in Shillong and mobile internet services were temporarily suspended in the wake of vandalism, arson and snatching away of weapons from the police personnel on Sunday in protest against the killing of a surrendered former Hynniewtrep National Liberation Council (HNLC) militant, Cheristarfield Thangkhiew, who was killed in a police raid on Friday.

Meanwhile, petrol bombs were thrown at Meghalaya Chief Minister Conrad Sangma’s personal residence on Sunday on a day marred with violence and protests over the death of a former rebel leader resulting in a two-day curfew in Shillong, the NDTV reported.

Earlier in the day, state home minister Lahkmen Rymbui resigned who alleged former rebel leader Cherishstarfield Thangkhiew “killed following the raid of police at his residence exceeding the lawful tenets of the law”.

The state Home Minister, in his resignation letter to the Chief Minister, also proposed a judicial enquiry into the matter, adding, “I would like to request you to relieve the Home (Police) Department from me with immediate effect. This will facilitate free and fair enquiry taken by the government to bring out the truth of the incident.”

Black flags were spotted in several locations in Shillong, the capital city of Meghalaya in protest against the killing of Thangkhiew, during the Independence Day celebrations.

The Black Flags were put up by a group under the banner “Voice of Mawlai people” in protest against the ‘killing’ of surrendered HNLC leader Thangkhiew.

There were reports of arson and stone pelting from several parts of the city. Director General of Police R Chandranathan confirmed to UNI that a SUV vehicle requisition by the State police was hijacked away by the miscreants near Umshing-Mawkynroh police outpost before it was set ablaze at Jaiaw area.

Chandranathan said the miscreants also decamped with three INSAS rifles and one magazine of the SF-10 personnel from the vehicle.

In fact, the hijackers of the SUV vehicle zoomed through Mawlai brandishing the police weapon, a scene which was witnessed by people lined up the streets in Mawlai.

“The investigation is on to find out the identity of these miscreants,” the police official said. Deputy Commissioner of East Khasi Hills district, Isawanda Laloo said total curfew has been clamped from 8 p.m. on Sunday to 5.am of August 17 or till further order following incidents of stone pelting, arson and theft, and a serious breakdown of law and order in parts of Shillong city.

“… there is every likelihood of further breach of peace which may lead to incidents causing loss of life and property and likelihood that the breach of peace may spread to other parts of the district,” Laloo stated in her order promulgating curfew.

Meanwhile, internet services in the East Khasi Hills district, which includes Meghalaya capital Shillong and in adjoining districts of West Khasi Hills, South West Khasi Hills and Ri-Bhoi have been temporarily shut for 48 hours since 6 pm on Independence Day.

“The suspension of internet services was initiated as there was likelihood of media platforms like Facebook, Twitter and YouTube to be used for transmission of information through pictures, videos and text and “have a potential to cause the serious breakdown of law and order,” a notification issued by State Home Secretary C.V.D.Diengdoh stated.

“Mobile internet and data services of all mobile service providers have been temporarily suspended under the Indian Telegraph Act, 1885,” Diengdoh said.

On the other hand, Thma U Rangli-Juki (TUR) condemned the decision of the government to suspend mobile internet/data services of all mobile service providers for 48 hours in four districts of the state and declaring total curfew in the Shillong Agglomeration.

“This decision reeks of desperation from the part of the government who have shown a lack of ability in tackling law and order in the state ever since it came to power in 2018,” TUR leader Angela Rangad said.

Alleging that suspension of mobile internet/data services seems to be the only tactic the MDA government resorts to, to cover up its incompetency in handling law and order, Rangad said, “This suspension is anti-people as mobile internet is an essential service in terms of online education, online business services, monetary transactions, personal communication, and more; especially during this COVID-19 pandemic period. Also, suspension of mobile internet services sets a bad precedence in terms of censorship and the continued use of such a tactic will only lead to a gradual lessening of the Freedom of Expression of the citizens of the state”.

The Civil Society Women’s Organization (CSWO) has condemned the attacks on Police and SF 10 personnel and urged the people not to allow anti-social elements to take the chance of the death of Thangkhiew.

“The Government should protect their own servants too and find out the culprits who are now taking advantage of the death of Cheristerfield Thangkhiew as police too are to be protected and are also part of the society,” CSWO Chairperson Agnes Kharshiing said.

“The CSWO will not keep quiet about the killing of Thangkhiew and illegal arrest of the sons of Thangkhiew, but we will also not allow the violence and crimes in the State by others too,” Kharshiing said, urging the people to bring about calm and peace. With agency inputs