Under Group I, Rs 2,60,66,181 was sanctioned for work which includes the construction of the main building, including sanitary installations, internal and external water supply, and internal electrification of the building. 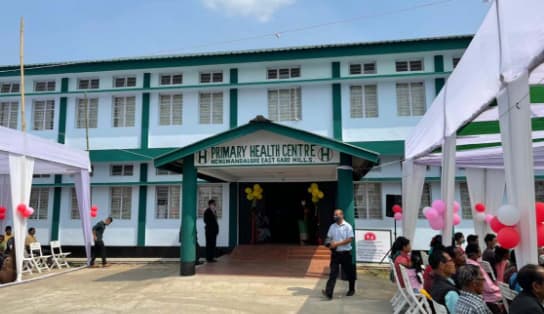 Shillong: Chief Minister Conrad K Sangma, who is on a tour of the Garo Hills region, inaugurated the Primary Health Centre (PHC) at Nengmandalgre in Williamnagar, East Garo Hills district, here on Tuesday.

Under Group I, Rs 2,60,66,181 was sanctioned for work which includes the construction of the main building, including sanitary installations, internal and external water supply, and internal electrification of the building.

For Group II, Rs 3,21,97,098 was sanctioned for the construction of two quarters for medical officers, four units of staff quarters and two units of Grade IV quarters inclusive of sanitary installations, internal and external water supply, and internal electrification of the same

“The construction and upgradation of healthcare facilities in the districts has been the mandate of the MDA (Meghalaya Democratic Alliance) Government. The PHC will cater to the people of several villages across the Simsang River in Williamnagar town and will immensely help the villagers and patients in rural areas to have access to basic medical treatment,” the chief minister said.

“As announced last year, the government is committed to improving the public health infrastructure across the state and an investment of Rs 75 crores to upgrade PHCs and CHCs (Community Health Centres) will tremendously help our endeavour,” he added.

On external and Central government aid, Sangma said, “The sanction of Rs 500 crore by the 15th Finance Commission and the Rs 350 crore by the World Bank will go a long way in uplifting the health infrastructure in Meghalaya. We dedicate all our efforts to our people”.

Tura Lok Sabha MP, Agatha K Sangma, who was also present on the occasion said that the increase in the Union health budget by Rs 10,000 crore this year will enable the creation of better healthcare facilities and infrastructure in Garo Hills as well.

She praised the chief minister for his concerted effort to improve the health infrastructure in the state and for his concern for the welfare of the people.

“We are intensifying our efforts to undertake and complete several ambitious road projects in the state for the welfare of the people with the sanctions from the Government of India for the improvement of road infrastructure in the state,” the Chief Minister said.