On Saturday, Ao, who is also BJP’s in-charge Meghalaya, had stated that “regional parties with national outlook have one agenda – go to Delhi with a begging bowl. What they do with it after returning is an open secret .” 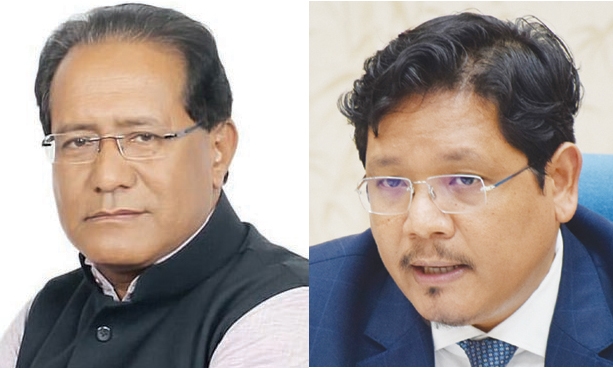 Shillong: Meghalaya Chief Minister Conrad Sangma along with his alliance partners – United Democratic Party (UDP) and People’s Democratic Front (PDF) has hit out at BJP national vice-president, Dr Chuba Ao for his maverick statement in which he accused State regional parties of going to New Delhi with a “begging bowl”.

On Saturday, Ao, who is also BJP’s in-charge Meghalaya, had stated that “regional parties with national outlook have one agenda – go to Delhi with a begging bowl. What they do with it after returning is an open secret .”

Countering Ao’s veiled attack, Chief Minister Sangma said, “He has brought down his people and has made them look in a very bad light.”
“I am surprised that he (Ao) had made such a statement. I don’t know why he (Dr Ao) had made this statement as he is from the North East. He has full knowledge of how things work in the North East. Unfortunately, he made a comparison,” Sangma, who is also the supreme leader of the NPP, said.

“… majority funds do come from central government, even the taxes and different schemes… majority of the funds come from the central taxes but that is a way the government of India works and that is why finance commission works in this aspect,” the Chief Minister explained.
Sangma, who is heading a seven-party led Meghalaya Democratic Alliance (MDA) government in which the BJP is a part of it, asked the BJP national vice-president to come and see the works that are happening in MNREGA where the state has spent Rs 600 crore at one point of time.

“We are almost touching Rs 1500 crore… that is more than double… 100 per cent increased… where we use to be spending just Rs 10 crore in NRLM… today we are spending Rs 100 crore in NRLM projects. In JJM, we are one of the few states that got bonus money last year for spending all the budgetary allocations that were made to us and meeting the targets that were given,” Sangma said.

On the other hand, the UDP asked the BJP to leave the MDA coalition government if they are not happy. “We have nothing against them but saying that we go to the Centre with a begging bowl is an insult not only to the regional parties but to the people of the state as a whole. We are not beggars,” UDP General Secretary, Jemino Mawthoh said.
He said the regional parties cannot avoid the Centre for policies, projects and implementation of various programmes.

State Agriculture Minister and PDF president, Banteidor Lyngdoh, said, “Ao statement is unacceptable. He has to understand all the states in the country are entitled to funds from the Centre.”

Only ‘reset’ of economic policy will help tide crisis: Chidambaram