Moving the privilege notice, Nongrum pointed out the action of the Speaker amounted to committing breach of privilege against him by moving away from the 'rule book' on March 8. 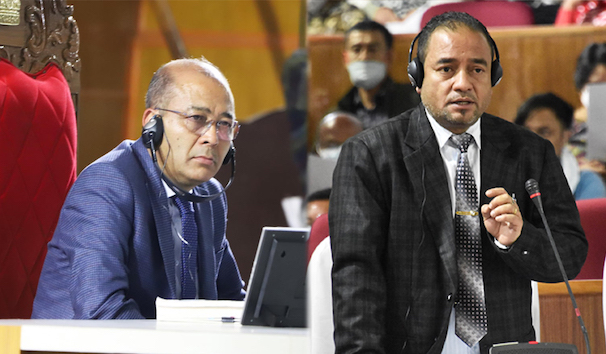 Moving the privilege notice, Nongrum pointed out the action of the Speaker amounted to committing breach of privilege against him by moving away from the ‘rule book’ on March 8.

The KHNAM legislator told members of the House that he had come prepared for the introduction of the Meghalaya Agriculture Land Regulation Bill, 2022 and was ready to move a motion for leave as per rule for consideration of the house.

It was listed as item No 4 (a). “Why did you (Speaker) move away from the rule book and asked me to beg leave to introduce, why did you not ask me to move a motion for leave to introduce. I consider your action against me that day a breach of privilege,” Nongrum asked.

“You Mr Speaker Sir have curtailed my right. It doesn’t take much to understand that there is a big difference between beg leave to introduce and move a motion for leave to introduce. If you Mr Speaker Sir had a correct understanding as to what you want me to do on that day why didn’t you communicate that understanding to me by quoting the rules…I consider your act of omission that day as breach of privilege,” Nongrum added.

As per rule, the Speaker said, a private member’s bill should have been circulated to all members for their perusal and examination two days in advance before it was listed for the business.

“A member who brings the private member bill is allowed to give a brief explanatory under Rule 71 provided as per Rules of Procedure and Conduct of Business. Accordingly, you (Nongrum) could have requested to make a brief explanatory statement before begging leave of the House for thenintroduction of the bill. I had also allowed (Opposition Trinamool Congress legislator) George B Lyngdoh who had also brought a private member’s bill on March 10 but there was no indication from your side to make any explanatory statement which I could have considered,” Lyngdoh said.

Nongrum’s move against the Speaker saw objections from both the ruling and the opposition benches. After Voting on Demands for Grants, the Speaker again gave his ruling and expunged the entire speech of Nongrum from the proceedings of the House as many unparliamentary words and questioning the dignity of the Chair were used by him during the course of his speech.

“If the Speaker is of opinion that words have been used in debate which are defamatory or indecent or unparliamentary or undignified, he may, in discretion, order that such words be expunged from the proceedings of the House,” Lyngdoh said.