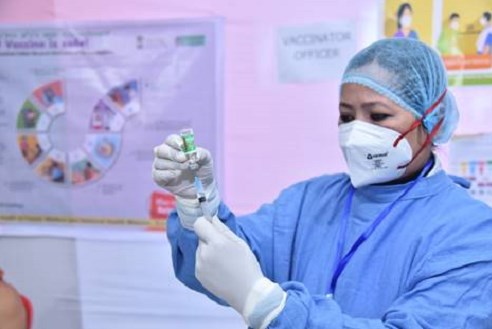 Imphal: Manipur on Tuesday recorded 785 new coronavirus cases, the highest in eight days, while there less persons died from the pathogen, the health department said.

Eight new fatalities took the toll to 998, the bulletin said.  One person each at Raj Medicity, District Hospital Churachandpur and PHC Kangpokpi, two at RIMS and three at JNIMS hospital expired during the past 24 hours. Among them four were from Imphal West, one each at Imphal East, Kakching, Kangpokpi and Chandel.

Like the previous days, Imphal West has the maximum number of active cases at 309, followed by Imphal East at 115. Churachandpur at 77 stood at third, Bishnupur and Thoubal have the same number at 62, so far.  Kamjong and Pherzawl districts have reported no Covid case. Tengnoupal has only one active and Kangpokpi has two.

A total of 8,074 tests, including 4,602 RT-PCR/TruNat tests, were conducted a day ago, according to the health bulletin on Tuesday.  During the same period, 476 persons were discharged, out of which 309 are from home isolation, 30 are from RIMS, 10 from JNIMS and the rest are from other Covid care facilities. The recovery rate is 84.04 per cent, which is little lowered than the previous day.

In the last 24 hours, a total of 1621 D-type Oxygen cylinders and 441 B-type Oxygen cylinders have been made available to different health facilities of Manipur. Despite the claims of the Manipur government of having enough oxygen stock in the state, sources informed The North East Affairs that almost two-third of the required Oxygen are brought from outside.

As per latest information, a total of 5454 persons were vaccinated on Tuesday against 327 a day before.