The award is to be sponsored by the Education Department, Government of Manipur. 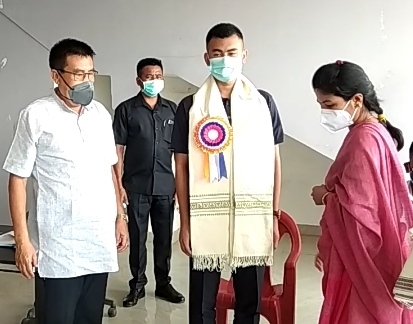 Minister Rajen was speaking at a simple function held for the felicitation of Namoijam Naoba Meitei who secured 27th all India rank, in the UPSC, National Defence Academy, exam, 2021, at his residence at Salam, Imphal West, Saturday.

Minister Rajen said that Mirabai Chanu’s Silver Medal in Tokyo Olympics has inspired young sports talents of the state. It is indeed an exceptional moment of pride of the state and the country. The incentive will be handed over to Mirabai Chanu as soon as she returns to the state, he added. The award is to be sponsored by the Education Department, Government of Manipur.

During the reception occasion of Namoijam Naoba Meitei, 27th Ranker, All India UPSC, NDA Exam, 2021, Rajen said securing 27th rank in such all India competitive exams is not an easy task. Such achievers from such a small state should be encouraged by all. They will act as a role model for future aspirants.  S Rajen also handed over Rs. 30,000/- to Naoba for his journey expenditure for training.

Naoba was born and brought up at Khonghampat Khunou. Born to N. Naran and N. (Ongbi) Premila Leima, Naoba Meitei studied at Sainik School Imphal from Class VI standard. He also has outstanding achievements in the fields of sports and other co-curricular activities. Naoba informed that his achievement is because of his teachers’ and parents’, support.