The event was organised by Kangpokpi Forest Division, Govt. of Manipur to mark the Celebration of Forests. 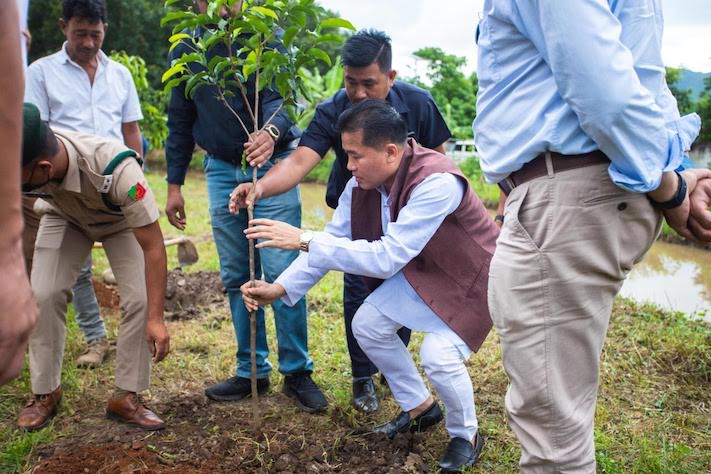 The event was organised by Kangpokpi Forest Division, Govt. of Manipur to mark the Celebration of Forests.

The campaign was started with the aim to encourage public participation in planting trees and making the environment greener. With the unpredictable weather phenomena observed frequently in the State, planting trees becomes one of the most effective and efficient ways to combat Climate Change, which can be achieved only with active public participation The event saw mass participation from Village Authority leaders and villagers of the nearby villages -Hararou, Yumnam Khunou and Sinam , youth clubs, student unions.

After the successful launch, the celebration will continue with more public participation, in the first week of July. Around 13000 seedlings will be planted across Kangpokpi Division at Taphou Kuki, Toklang Athongba, Waichong Range, Songp hum Village, Langkichoi.The Plantation will continue for the next couple of months.

Van Mahotsav was started in 1950 by the then Union Minister for Agriculture and Food, K.M.Munshi, to create enthusiasm among the masses for forest conservation and planting trees. It is a week-long festival, celebrated on different days in different parts of India. In its original aim, every citizen of India is expected to plant a sapling during Van Mahotsav Week. Also, awareness campaigns about the benefits and protection of trees and the harm caused by cutting down trees are held. It is the festival of life.

As a part of Van Mahotsav celebrations throughout the country, afforestation drives are launched in a bid to retain the vanishing forest covers of the country. The declining number of trees has brought a major change in climate too. So there is a dire necessity of festivals such as Van Mahotsav, to restore the forest cover in the country

Further Department has set a target of 75 Lakh Seedlings and presently has planted around 27 lakh Seedlings. The Department will arrange for seedlings to all the Organisation, Local Clubs, NGOs, CSOs, and individuals, who want to join/take part in this campaign. It appealed to the general public to come in huge numbers and participate in the movement and make it a grand success. The event was also attended by the Divisional Forest Officer, Kangpokpi Forest Division and ACF, Kangpokpi Forest Division along with staff of Forest Department.

Kangpokpi Forest Division has come up with a theme of “ One student One Tree” wherein all students of Kangpokpi Forest Division will be distributed a seedling each to grow and nurture. Further Online Quiz program will also be organised in 1st week of July. Further, a web platform has been developed to issue Certificates online. Manipuri diaspora living outside the state can vouch for planting a seedling each through the web platform manipurforest.vertace.org, said a press release issued by the District Forest Officer, Kangpokpi.