The three persons who succumbed to the deadly virus are from Kakching, Imphal West and Noney respectively. 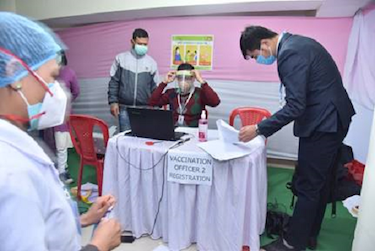 Imphal: Three persons succumbed to Covid-19, 277 persons (272 general population five CAPF) tested positive and 352 persons recovered in the last 24 hours leading up to 5 pm of Friday in Manipur, as per an official release from the Health Department.

The three persons who succumbed to the deadly virus are from Kakching, Imphal West and Noney respectively. All three deceased persons had co-morbidities; two of them had taken the 2nd dose of Covid vaccine while one of them had not been vaccinated at all. The cumulative death toll in the state now stands at 2054.

Of the 272 persons from the general population who tested positive, 108 are from Imphal West, 76 from Imphal East, 16 from Thoubal, 13from Kakching, 12 each from Bishnupur and Chandel, nine from Churachandpur, eight from Senapati five each from Kangpokpi and Ukhrul,  two from Noney and one from Jiribam.