Over 400 personnel across multiple national and state departments which also include Indian Army, Assam Rifles, Territorial Army are involved in search and rescue works 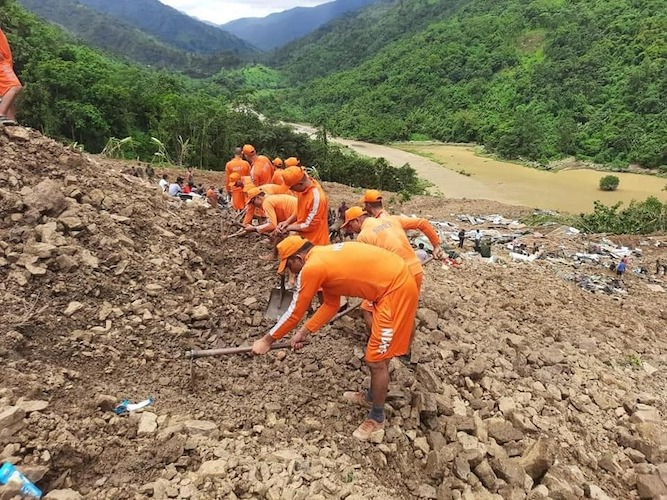 Imphal: The death count due to a massive landslide at a Territorial Army Camp in Manipur’s Noney district has increased to 25 and 38 are still missing, officials said on Saturday. The dead include 18 jawans.

Meanwhile, the district authorities have informed that due to the unfortunate landslide the flow of Ijei river has been obstructed by the debris, creating a dam-like storage condition which if breached will wreak havoc to the low-lying area of Noney district headquarters. Whoever can evacuate are also advised to evacuate immediately.

Even though all efforts are currently being undertaken using a dozen earth movers to make a clear channel for allowing safe outflow of stored water, citizens are advised to take their own precaution, and especially ensure children do not come out near the river.

Public are advised to stay alert and be prepared for any assistance in case rain conditions deteriorate further.

Manipur Chief Minister N Biren Singh, accompanied by top Army and civil officials, visited the disaster site on Friday. The Chief Minister has announced a compensation of ₹ 5 lakh each for the family of those who died and ₹ 50,000 for those injured. With agency inputs