Manipur Congress to decide on defamation suit against senior journalist

Joykishan, meanwhile, denied taking any money from anyone including CLP Okram Ibobi and declared that he would retire from politics if Yambem Laba can prove that he took money from the former Chief Minister. 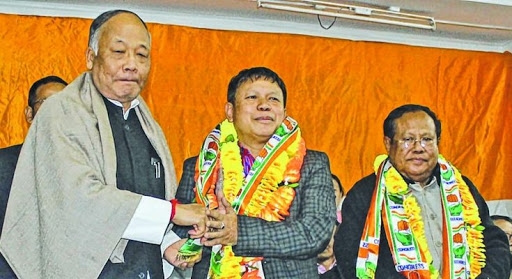 Imphal: The Manipur Pradesh Congress Committee will take a decision whether or not it would file a defamation suit against senior journalist Yambem Laba on his ‘reported’ allegation that MLA K Joykishan of Thangmeiband Assembly constituency took Rs 3 crore from Okram Ibobi Singh, former Chief Minister and present CLP leader in Manipur Assembly.

Joykishan, meanwhile, denied taking any money from anyone including CLP Okram Ibobi and declared that he would retire from politics if Yambem Laba can prove that he took money from the former Chief Minister.

A decision will be taken in this regard after a CLP meeting which will be held on Monday at Congress Bhavan, said N Loken Singh, interim president of MPCC.

The discussion comes in the wake of an article written by Yambam Laba, Special Representative of Imphal for The Statesman, a Kolkata-based newspaper which alleged that Joykishan, a former BJP legislature was “reportedly and allegedly” paid Rs three crore by Ibobi Singh to switch over to the Congress before the 2017 state assembly election.

“He (Joykishan) won on a Congress Party ticket then but is again seeking greener pastures, knowing the predicament of contesting elections on an opposition ticket as the price of a vote had reportedly been Rs 2,000 last time and is expected to touch a record Rs 5,000 next year,” wrote Laba in his article.

Reacting to the reported article as well as a ‘discussion’ on a local TV channel between Congress spokesperson Hareshwar Goshwami and Yambem Laba himself, Loken said that the allegation made by the senior journalist was absolutely wrong and baseless. He further noted that the Ibobi Singh-led Congress government at the time had an absolute majority with over 50 MLAs support in the 60-member House and paying of Rs 3 crore to only one MLA, who is Joykishan for the sake of a stable government, was unfounded and illogical.

The Congress interim chief, however, clarified that the further course of action would be taken once the party gets consent from those involved which are CLP leader Okram Ibobi and MLA Joykishan.

In a video message on Sunday, the Congress lawmaker charged that Laba writes any story for his own benefit and self-interest without any evidence and proof. He further appealed to the State’s Journalists body to censure such baseless allegations and articles written by a few journalists.