He appealed to the public to avail the opportunities provided under various welfare programs of the Government. 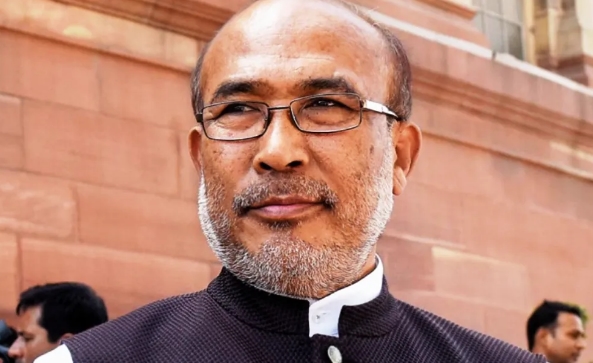 Imphal: Manipur Chief Minister N. Biren Singh on Friday launched a new innovative scheme “Cultivation of Horticulture Crops as an Alternative to Poppy Cultivation in Hill Areas” as part of the “War on Drug 2.0” campaign.

He also launched the Brand “Manifresh”. The launching program was organized by the Department of Horticulture and Soil Conservation at its Office Complex here at Sanjenthong.

N. Biren Singh said that the Government was committed to its War on Drugs Campaign and there would be no question of moving back in its effort to root out the drug menace from the State.

Continuing that his Government had no enmity with anyone or any community, he added that the campaign was started to conserve forest areas, uproot poppy cultivation, drug trafficking, and its consumption ensuring a better future for the younger generations.

The Chief Minister informed that 355 farmers from Kangpokpi, Kamjong, and Ukhrul Districts who earlier depended on poppy cultivation for their livelihood had benefited from alternative arrangements under the very War on Drugs Campaign.

He stressed the need for the concerned officials to visit various villages and meet the farmers, making them aware of the ill effects of poppy cultivation and about the initiatives of the Government towards providing alternative arrangements for earning their livelihood. He also expressed his desire that concerned officials should conduct camps at different places to timely provide saplings and seeds for suitable alternative cropping.

Terming the people’s unwavering support to the War on Drugs Campaign as a historic movement against drugs, he assured the farmers not to worry about marketing platform for their produce as the Government has provided for buyback of their produce and added that cold storage facilities had also been set up in many places.

Mentioning the TRIFED initiative which is committed to transforming the lives of tribals in India, he informed that more than 400 Self Help Groups had been formed in the State employing around

Outlets for selling the products had been opened at many places outside the State, he added.

N. Biren recalled the early initiatives taken by Peh Village by uprooting the poppy plantation in their areas for which Government had rewarded the villagers with 10 Lakh Rupees.

He added that around 130 villagers of Peh had benefitted under phase III of “Mission Organic Value Chain Development for North Eastern Region” (MOVCDNER).

He expressed satisfaction with the people’s support for the initiatives taken up by the Government and assured that the Government would provide all requirements for alternative cropping.

Horticulture and Soil conservation Minister Letpao Haokip stated the State Government had started providing saplings of high value and nutritional crop varieties, which is in high demand from outside the State too, as an alternative to the poppy plantation.

Plantation of such high-value crops would be economically more helpful to the farmers, he added.

Continuing that the Government would provide saplings and buyback certificates to the farmers, he stated that they need not worry about selling their products. With the success of the initiatives of the Government, we would be able to see a significant change in the economy of the State with self-sufficiency, he added.

He appealed to the public to avail the opportunities provided under various welfare programs of the Government.

Later, the Chief Minister flagged off the vehicles carrying planting materials that were to be provided to farmers of 5 districts including Chandel, Kamjong, Kangpokpi Tengnoupal, and Ukhrul. Planting materials of Ginger, Turmeric, Large Cardamom, Low chilling apple, Pineapple, Kachai lemon, and Tamenglong Orange will be distributed to the farmers of the 5 districts in the First Phase.

While winter vegetable seeds will be distributed by October 2022 as the Second Phase.

The State Government had taken a multi-pronged approach through inter-departmental efforts to provide alternative livelihood to poppy cultivators with a sustainable integrated farming system.

An amount of Rs 400 Lakhs is earmarked for the year 2022-23 for implementing the alternative livelihood for poppy cultivators.

An Annual Action Plan with different components is also prepared for implementation with a target of 500 nos. of Farmers covering about 500 acres in the districts of Chandel, Kamjong, Kangpokpi, Ukhrul, and Tengnoupal Districts.

“Manifresh” is a combination of words derived from the Word Manipur & Fresh Horticulture Products of the state. The produces include both fresh and processed horticulture products. The Logo and Brand had been launched to bring the entrepreneurs under a common platform and banner through the Brand Building initiative.