Biren Singh said that every citizen of India should feel proud for being an Indian and should think for the overall development of the Nation in the first place. 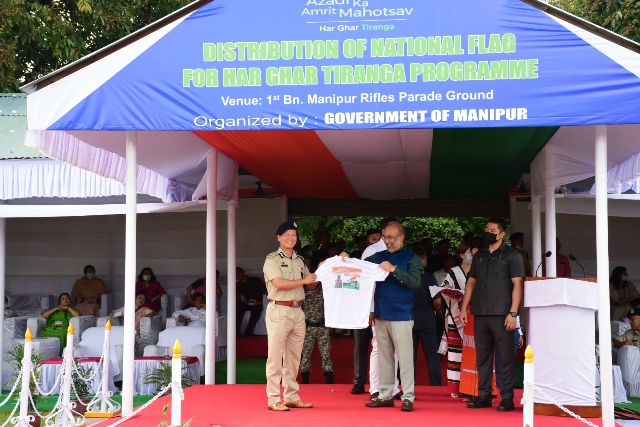 Impha: Manipur Chief Minister N. Biren Singh said that every citizen of India should feel proud for being an Indian and should think for the overall development of the Nation in the first place.

The Chief Minister was addressing the gathering at the Mass Sale/Distribution of National Flags to Government Employees as a part of Har Ghar Tiranga Campaign under Azadi Ka Amrit Mahotsav held at the 1st Battalion Manipur Rifles Parade Ground.

The Har Ghar Tiranga Campaign is an initiative to encourage people to bring the Tiranga home and to hoist it from 13th to 15th August, this year, to mark the 75th year of India’s independence. The idea behind the initiative is to invoke the feeling of patriotism in the hearts of the people and to promote awareness about the Indian National Flag.

N. Biren Singh appealed to all the Government employees and the public to hoist the national flag at their houses from 13th to 15th August this year as homage to the all freedom fighters, whose tireless contribution had regained independence for the Country.

He continued that the State Government would also observe various programmes across the State on 13th and 15th of this month, to pay tribute and respect to our great leaders who had sacrificed their lives for the cause of the motherland.

Such an act of paying homage to our freedom fighters would imbibe a sense of nationalism and love for the motherland amongst the younger generations, he added.

He further mentioned that Government employees should take the initiative of making their neighbours aware of the importance of the Har Ghar Tiranga Campaign and participate in the campaign by hoisting the National Flag.

Stating the vital roles to be played by Government employees towards the development of the State, the Chief Minister maintained that every Government employee should perform their duties sincerely with dedication and honesty for service to the people.

He added that Government employees should refrain from any activities which would create tensions among different communities.

Speaking on the honour and dignity of our National Flag, the Chief Minister appealed to the public to take utmost care and hoist the flag properly. He added that the flag should not be disposed of on the ground after being hoisted from 13th to 15th August. Rather, it should be kept in a proper place with honour as it is the symbol of national pride, he added.

During the programme, N. Biren Singh distributed the National Flags to representatives of all Government Departments for hoisting it at their respective Office buildings. The Chief Minister also launched a T-shirt for the bike rally which will be held on 14th August, 2022.