Biren Singh said the seriousness, sensitivity, and alertness exhibited by India in the fight against COVID-19 is an example unto itself that will be registered in the annals of history 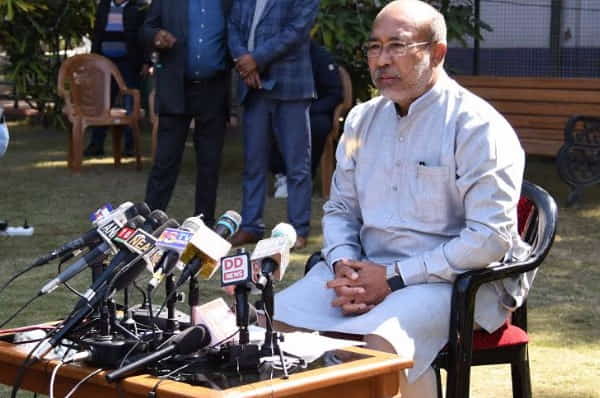 Imphal: Manipur Chief Minister Nongthombam Biren Singh heaped praises on the Union Budget presented by Finance Minister Nirmala Sitharaman and termed it to be a ‘historic’ one that will propel the economy to a double-digit growth despite the COVID-19 impact.

Addressing a press conference at his residence here on Friday, Biren said the Budget would lay the foundation of ‘Ease of Living’ because it has underlined the vision of an Atmanirbhar Bharat. He expressed his gratitude to Prime Minister Narendra Modi and Finance Minister Nirmala Sitharaman for their efforts in presenting a farsighted Budget that aims at ‘Universal Well-Being’ during the testing times of COVID-19.

Stating that the Budget is the foundation vision document for a new decade, the Chief Minister said that it underlines six pillars, viz. Health and Well-Being, Physical and Financial Capital, Inclusive Development for Aspirational India, Reinvigorating Human Capital, Innovation and R&D and Minimum Government Maximum Governance.

Over the past six years of Prime Minister Narendra Modi’s governance, N. Biren Singh said, the country had been reaching various milestones of development which the common people of the country aspire for. Today, India has emerged on the global stage as a proud nation that is brimming with possibilities and abilities, he added.

Maintaining that the Budget came at a time when the world is still battling COVID-19, N. Biren Singh said that the seriousness, sensitivity, and alertness exhibited by India in the fight against COVID is an example unto itself that will be registered in the annals of history. He added that India is one of the leading countries in the fight against COVID and vaccination, which is reflective of the Prime Minister’s visionary leadership, he said.

When Prime Minister Narendra Modi took oath of office in 2014, he said that his Government was dedicated to the poor. From then on, the Government had taken a series of steps to improve the lives of the poor, the Chief Minister stated. Under the Ujjwala Yojana, 8 crore families received free gas cylinders. In Budget 2021-22, a proposal has been made to expand the reach of the scheme to 1 crore new beneficiaries, he said. The Government has also tried to make a provision for ensuring One Country, One Ration Card accessible to migrant labourers, he added.

Stating that the Modi Government, which turns every disaster into an opportunity, has proposed in the Budget to take healthcare ahead as a priority concern, the Chief Minister mentioned about the increase of 137 per cent in the health budget from Rs. 94,000 crore to Rs. 2.38 lakh crore. It has shown Modi Government’s alertness to the need to build a ‘Healthy and Able India’ in the face of health challenges, he added.

The provisions in the Budget to meet the challenge of potable water for all reflect the Government’s view on life of dignity for all citizens, the Chief Minister said and added that by setting aside a budget of Rs. 35,000 crore for COVID vaccine, the Government has given shape to its plan of making the vaccination drive unstoppable.

In his six-year long tenure so far, the Prime Minister had taken several steps for agricultural reforms by giving priority to farmer welfare. To ensure that farmers have access to easy credit, the Government has proposed a Budgetary allocation of Rs 16.5 lakh crore, the Chief Minister said.

The Government is undertaking a series of reforms to ensure doubling of farmers’ income, get the right price for their agricultural produce, avoid facing difficulty in selling their produce, not sacrificing hard work of farmers to middlemen, get loans without hiccups and avoid facing difficulty in selling their produce. The historic decision to give farmers an annual sum of Rs 6,000 as Kisan Samman Nidhi is reflective of the Modi Government’s farmer welfare policy orientation.

N. Biren Singh further said that the provisions to ensure that every citizen gets clean water, roads to reach every village, highways expansion happens on a large scale and making public transport easily accessible, in the Budget 2021-22 are commendable. Over the last six years, the pace of work on National Highways had risen along with the work on rural roads. The Government had made a provision of Rs. 1,18,000 crore for road transport and National Highways, he added. Keeping both the existing plans and future requirements in mind, the Government in its Budget 2021-22 had made a provision of Rs 1.10 lakh crore for railways network, he added.

The Chief Minister also praised the Central Government for its broad provisions in the educational sector in the light of the New Education Policy. The formation of Higher Education Council, establishment of new Army schools, transformation of 15,000 existing schools into model schools and the move to open new schools in Tribal areas with an allocation of Rs. 38,000 crore in the Budget is a laudable effort and will go a long way to transform schools in far-flung areas, he added.

He also lauded the Union Government for the successful steps towards achieving Atmanirbharta in the defence sector to keep the security and sovereignty of the country intact. India had been able to achieve a special place in the world because of the security of its borders. India’s dependence on other countries for its defence equipment had reduced and India had emerged as a ‘manufacturer’, he said. The increase in allocation for the defence sector in Budget 2021-22 is worth welcoming. The Government’s efforts towards securing its sky (air space), water and ground are appreciable, he added.

In Budget 2021-22, the Government had proposed an investment of Rs. 20,000 crore in public banks, increasing the FDI in insurance sector to 74 per cent and making the process for Start-Ups easier. The decision to exempt people above 75 years of age from filing IT returns is a humanitarian step and the party appreciates its leadership for the decision, the Chief Minister observed.

The Chief Minister said that the Union Budget 2021-22 is for rural development, farmer welfare, strengthening of agricultural infrastructure, future-oriented changes in healthcare, basic infrastructure, improving the life of India’s poor, giving new opportunities to women and youths, running businesses with energy and giving shape to the commitments of an Atmanirbhar Bharat.