The CEO was addressing the Review Meeting on Election Preparedness held today at the Conference Hall of the Office of the Chief Electoral Officer, (CEO), Lamphelpat. 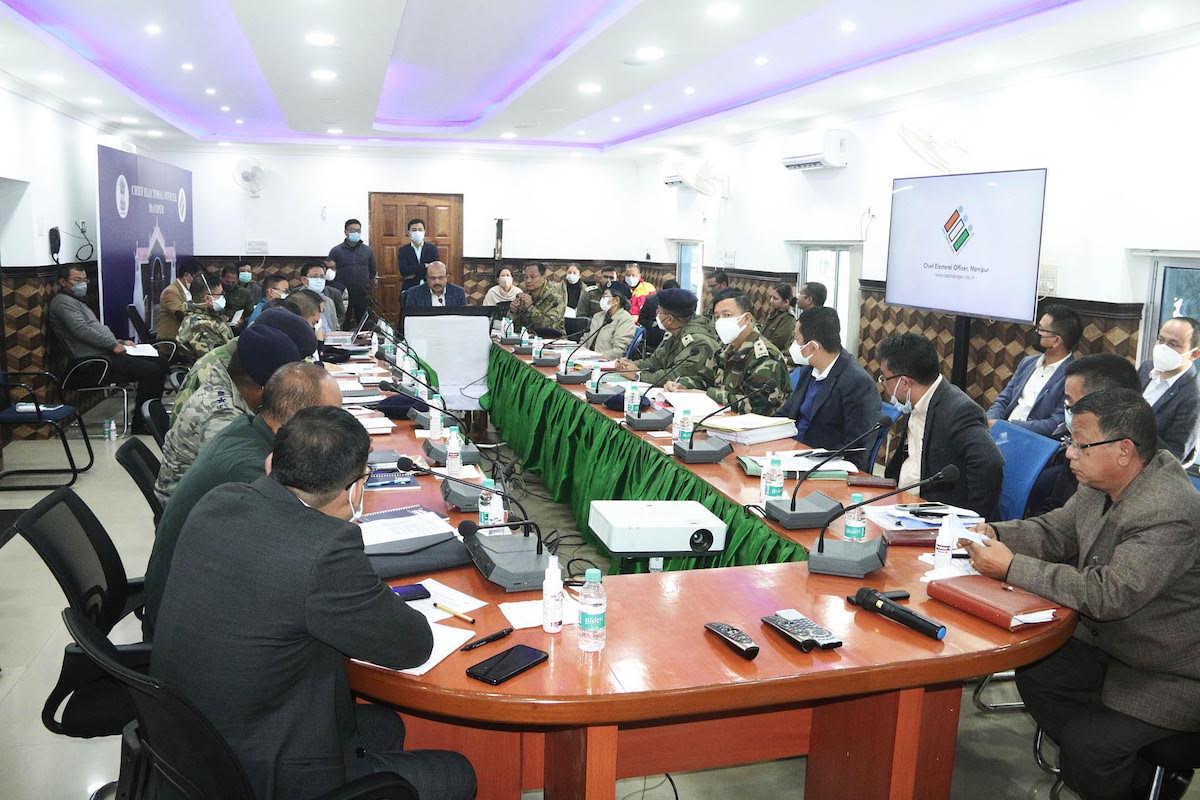 The CEO was addressing the Review Meeting on Election Preparedness held today at the Conference Hall of the Office of the Chief Electoral Officer, (CEO), Lamphelpat.

Rajesh Agrawal informed that the Election Commission of India (ECI) team may visit the state at the beginning of next month. He said that more meetings for the DEOs and SPs will be conducted. He instructed the DEOs and SPs to discuss the facts and interchange ideas expressed during the meeting.

The CEO, Manipur further pointed out that with ninety (90) days in hand to complete the whole process of Election by March 19, 2022, it is important that every DEO and SP put forth his/her doubts and issues regarding conduct of Election and raise it during the meeting. This will help in coming up with a common understanding of the situations prevalent in the districts in general and will also aid in resolving any similar situations on time.

Emphasising on the importance of Election preparedness, he said that everything needs to be set ready on time for the upcoming Election.

Nodal Officer for Law and Order, ADGP, Manipur, L. Kailun, IPS, highlighting the importance of maintaining Law and Order in the state especially during the upcoming Elections, confirmed the statement of the CEO, Manipur regarding the issues and problems prevailing in all the districts.

L. Kailun, IPS, expressing concern on the porous ‘state and international borders’, rise of unwanted activities, advised the concerned officials to stay alert, cooperate and tie up with the central forces to check illegal movements. He also asked the officials to keep a tab on the rising trends of political clashes in the state. He alarmed the DEOs and SPs that such activities need to be nabbed and contained at the initial stage to avoid making the situations more complicated.

In order to ensure good conduct of Election, early planning is required in far flung areas of the state where there is slow and poor communication and where connectivity problems prevail. He stressed that data on deposit of firearms for each district is the key indicator for proper management and maintenance of Law & Order.

PowerPoint Presentations (PPTs) were the main highlights of the Review Meeting with interaction among the officials. The presentations were made by Jt. Secretary Election, Shri K. Bono Singh on Postal Ballots/ETPBS; SNO, EEM, Bingku Konsam on Election Expenditure Management and SNO, MCC, Shri Yasser Ahmed on Model Code of Conduct.

DEO Churachandpur, Imphal West, Senapati, Bishnupur, Tamenglong, Imphal East, Thoubal, Kangpokpi, Jiribam and Chandel presented their information in the form of concrete District Election Management Plan (DEMP) PPTs and raised all issues that could be challenging for them in the conduct of the Poll Process.