Chief Minister N Biren, replying to a Starred question raised by MLA K Ranjit Singh, informed the House that there are no cinema halls in Manipur having digital cinema projector...The government is seriously considering the Cine policy and looking into the memorandum submitted by the 4 film groups of Manipur. 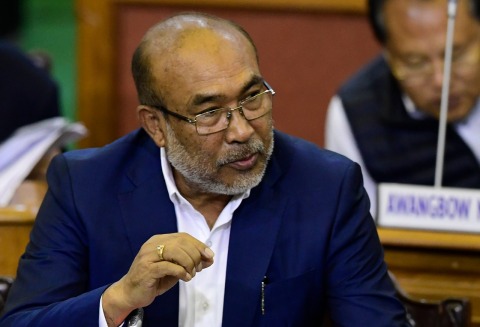 Imphal:  Leader of the House and Chief Minister N Biren Singh informed the House that the Government of Manipur has always been for a speedy conclusion and peaceful resolution of the Indo-Naga peace talks. He said it has been a long-pending issue and people have suffered in the wake of it. He was replying to a starred question raised by MLA Alfred Kanngam Arthur Monday on the last day of the ongoing 12th session of the 11th Manipur Legislative Assembly.

MAHUD Minister O Henry, replying to Starred question raised by MLA Kh Joykishan Singh, stated that the Imphal Municipal Council was declared as Imphal Municipal Corporation vide Government notification No.2/16/2011-MAHUD and published in the Manipur Extraordinary Gazette vide No.400(A) on the February 28, 2014. On the supplementary question pertaining to the absence of delimitation para in the said notification and on the insistence of Joykishan,  Minister Henry assured the house that he would try to do so expediously.

Chief Minister N Biren, replying to a Starred question raised by MLA K Ranjit Singh, informed the House that there are no cinema halls in Manipur having digital cinema projector. However, the palace auditorium of the Manipur State Film Development Society (MSFDS) has a digital cinema projector for film promotional activities. The government is seriously considering the Cine policy and looking into the memorandum submitted by the 4 film groups of Manipur. The state is trying to revive the film industry of Manipur and trying to implement the memorandum by March of the financial year 2021, he also stated.

CAF & PD Minister Th Satyabrata Singh, replying to Starred question raised by MLA AK Mirabai Devi, stated that the price of LPG is fixed at the rate as directed by the Ministry of Petroleum & Natural Gas, Government of India. He also said that the subsidy is not discontinued. There may be pending since December 2020 but the government is trying to expedite as quickly as possible, he assured.

Social Welfare and Cooperation Minister O Henry, replying to Starred question raised by MLA K Ranjit Singh, informed that there is plan to upgrade the post of co-operative inspector to the post of Group “B” (Class-II) Gazetted officer like other similar-pay scale inspectors of other departments of the state. The Cooperative societies department has put up the matter of modifying and updating the recruitment rules(RR) of the post of the inspector of co-operative societies that will be further examined by the Department of Personnel & Administrative Reforms (Personnel Division), he added.

Environment and Forests Minister Awangbou Newmai, in response to calling attention motion moved by MLA Kh Joykishan, mentioned that the Forest Department is taking action on the reported encroachment and excavation of earth from the Chingkhei Ching Reserved Forests Areas. Drawing the attention of the House, he clarified that the forest officials have arrested people involved in the illegal digging and collected fines amounting to Rs.1,18,630 from the arrested people for the period between September 2020 to January 2021.The Department is working despite facing lots of pressure and hardships due to lack of manpower of staff. Manipur has just one forest guard per 24 sq.km as against three forest guards per 24 sq.km in other states. He also stated that there is a plan to provide forest guards with single barrel guns for effective functioning.

Leader of the Opposition O Ibobi Singh and MLA TN Haokip gave observation regarding the above two bills.

Drawing the attention of the House, Leader of the Opposition O Ibobi Singh expressed that if the Government carries out the proper and effective implementation of the Go to Hills mission and MGNREGS scheme, it will be a good, meaningful step for the people of Manipur.