However, the BJP was leading at 82 seats. The CPI(M) led Sanjukta Morcha, in which the Congress and Indian People Front are in the alliance, was leading in 1 seat. 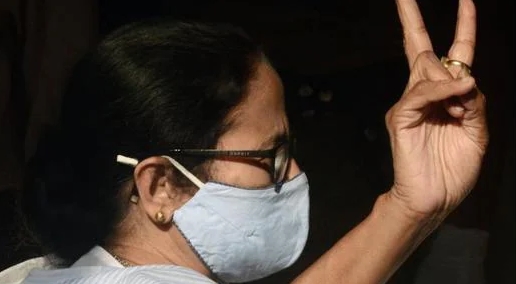 Kolkata: The Mamata Banerjee led Trinamool Congress (TMC) is heading for a two-third majority in the 294 seat West Bengal assembly election as the ruling party took lead in 207 seats as the latest trend in the counting showed.

However, the BJP was leading at 82 seats. The CPI(M) led Sanjukta Morcha, in which the Congress and Indian People Front are in the alliance, was leading in 1 seat.

However, the chief minister was trailing to BJP candidate Suvendhu Adhikari at Nandigram by over 3710 votes in the 5th round.

Trinamool Congress’s Derek O’Brien has tweeted a video of BJP leader and Home Minister Amit Shah stating the BJP would win 200 seats in Bengal. The BJP, according to current leads, is hovering at around 95

The election was held for 292 seats in the eight-phase poll that ended on April 29.

Shobhandeb Chattopadhyay of Trinamool Congress (TMC) is leading in Bhabanipur. Bhabanipore is the stronghold of Mamata Banerjee. She is a sitting MLA from the constituency but, this election she is contesting from Nandigram against party rebel Suvendu Adhikari.

Javed Khan of Trinamool leading in Kasba and Subrata Mukherjee leading in Ballygunge.

TMC candidate Becharam Manna is leading in the Singur constituency, according to initial trends. Since 2001, the seat was held by Rabindranath Bhattacharjee, who moved to the BJP ahead of the election.

The ruling party is leading in 14 out of 16 seats in Howrah despite massive defection of leaders from TMC to BJP.

Matua leader Subrata Thakur, fielded by the BJP from the local Gaighata assembly seat, is leading. The TMC has won the seat since 2001.

BJP MP and Union Minister Babul Supriyo is trailing by about 8,000 votes from Tollyganj. TMC has been maintaining that the only Union Minister contesting would lose in the election. TMC’s Aroop Biswas is leading from the Tollyganj seat.

At Chandannagar, state minister Indranil Sen is leading with 2,900 votes after the completion of the second round of counting. Meanwhile, BJP leader Locket Chatterjee is trailing by 1479 votes.