Shahid welcomed Prime Minister Modi to the General Assembly Hall on Saturday as Modi arrived to deliver his address. 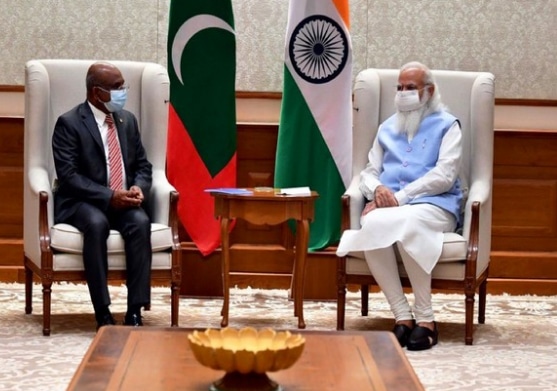 New York/New Delhi: Prime Minister Narendra Modi met President of the UN General Assembly Abdulla Shahid prior to delivering his address at the 76th session of the UNGA on Saturday, during which the Maldivian Foreign Minister thanked him for the continued support to the “Presidency of Hope”.

Shahid welcomed Prime Minister Modi to the General Assembly Hall on Saturday as Modi arrived to deliver his address.

“India is fully committed to multilateralism and to the United Nations.

“I thanked him for the continued support to the Presidency Of Hope,” he tweeted.

Shahid is the first Maldivian and only the sixth person from the 52-member Small Island Developing States (SIDS) to hold the prestigious post.

India was among the first countries to endorse his candidature and also canvassed for him.

In the election held on June 7 in New York this year, Abdullah Shahid was elected president of the 76th UNGA with an overwhelming majority — he received 143 votes out of 191 ballots cast, while Afghanistan’s former Foreign Minister Zalmai Rassoul got 48 votes.

The post of President of the General Assembly is held on an annual basis and rotated among various regional groupings. The 76th session (2021-22) is the turn of the Asia-Pacific group.

On April 30 this year, Shahid declared his vision statement titled “A Presidency of Hope: Delivering for People, Planet and Prosperity” and outlined his priorities for the UNGA during 2021-22.

He talked about five “rays of hope” in his vision statement: Recovering from COVID19, Rebuilding Sustainably, Responding to the Needs of the Planet, Respecting the Rights of All, and Reforming the UN.

After President Ibrahim Solih came to power in the Maldives in November 2018, the country’s foreign policy priority has been to restore relations with India, the US, and other Western powers which had declined during Abdulla Yameen’s period.

President Solih announced Abdulla Shahid’s candidature for the PGA in December 2018. India publicly disclosed its decision to support Shahid during the visit of Foreign Secretary Harsh Vardhan Shringla to the Maldives in November 2020.

President Ibrahim Solih described Shahid’s victory as a “proud accomplishment” and “a step forward in elevating the country’s stature on the global stage”.

In July this year, Shahid had visited India in his capacity as President-elect of the 76th session of the UNGA and called on Prime Minister Modi.

The President of the General Assembly (PGA) is responsible for chairing the UNGA session for the elected term and is also the presiding officer for this duration. The President has all the powers to decide a topic of discussion and issue statements on matters of importance.

The previous president, Turkey’s Volkan Bozkir, acted more as a representative of his country than a PGA with his remarks that Pakistan is “duty-bound” to raise the Kashmir issue in the UN more strongly.

India had expressed its strong opposition to the Turkish diplomat’s unwarranted reference with respect to Kashmir and said by making the misleading remarks, Bozkir was doing a great disservice to the office he occupies.