The Meghalaya High Court has directed the state government neither to relent on the the vaccination drive against COVID-19, nor persuade people to take the jab or provide for disincentives on refusal. 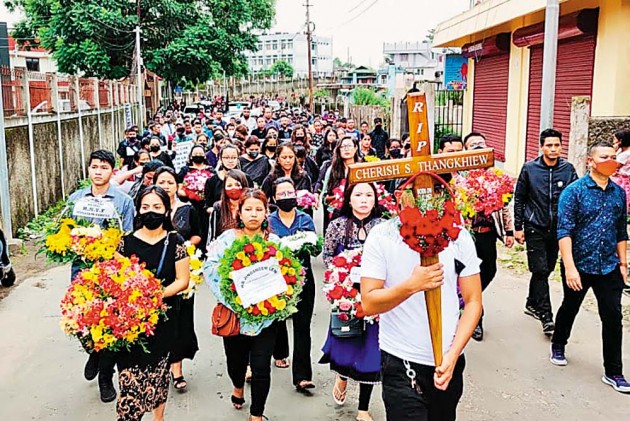 Shillong: The year had begun with the rollout of vaccines against COVID-19,which came as a major relief to the people of this mountainous state of Meghalaya. The Northeastern state saw a gradual decline in cases of infection and fatality. Several of the districts now have no active case, even as the East Khasi Hills, including state capital Shillong, remained the most pandemic-hit.

The Meghalaya High Court has directed the state government neither to relent on the the vaccination drive against COVID-19, nor persuade people to take the jab or provide for disincentives on refusal.

“The State should not relent on the vaccination drive or trying to persuade people to take the vaccination or even provide for disincentives upon refusal,” the Bench of Chief Justice Sanjib Banerjee and Justice W Diengdoh directed while dealing with a public interest litigation (PIL) pertaining to the action taken by the State to deal with the pandemic.

“Since the number of Covid cases in the state has been on the decline, let the matter appear in the first week of February 2022,” the Court said. “It appears that there are reservations in certain quarters regarding vaccination.

The state should adopt an aggressive policy in undertaking awareness drives and trying to convince people to vaccinate themselves, not only for their own benefit but also for the protection of others,” the Court had observed during the course of hearing the case on December 6 last.

“It will also be open to the state to formulate rules or guidelines so that persons unwilling to take vaccination do not expose themselves to others,” the Court ruled and listed the matter for further hearing on February 1, 2022.

Earlier, on June 23, 2021, the Meghalaya High Court had observed that “requirement of vaccination should be directory and not mandatory”, even as it clearly and unequivocally stated that “vaccination is the need of the hour” and in fact “an absolute necessity in order to overcome this global pandemic”.

Schools and colleges also reopened with staggered attendance, even as online classes and examinations also continued.

Tourist spots in the state were re-opened for vaccinated visitors, while there was considerable inflow of tourists from outside the state, which helped the flagging economy.

However, the state witnessed a major political upheaval towards the yearend with 12 of the 17 elected Congress legislators of the 60-member assembly merging with the Trinamool Congress, thus making the Mamata Banerjee-led party, which had no presence here, the main opposition force in the state, which will go to the polls in 2023.

The Trinamool termed Congress’ support an act of “desperation”.

Through the Helpline, guidance on pension-related issues, Maintenance Act and legal issues will also be provided.

Pristine white Me’gong flowers were in full bloom all over the picturesque Garo Hills as Meghalaya knocked into its golden era with chief minister Conrad Kongkal Sangma inaugurating the ‘Me’gong Festival’ on November 18, which aims to promote the culture, diversity, and the lifestyle of the Garos and also usher in the year-long festivity, celebrating the 50th year of statehood.

Chief Minister Conrad Sangma met with his Assam counterpart, Himanta Biswa Sarma on several occasions, with both announcing that the long-standing boundary dispute between the two neighbouring states would be amicably resolved at the earliest.

Earlier in the year, there had been skirmishes along the inter-state boundary, which, however, were quickly brought under control.

The law and order situation in the state remained by and large peaceful with all festivals, including Durga Puja, Diwali and Christmas held in joyous atmosphere in keeping with the safety norms and people eager to usher in the New Year with high hopes of better days to come.