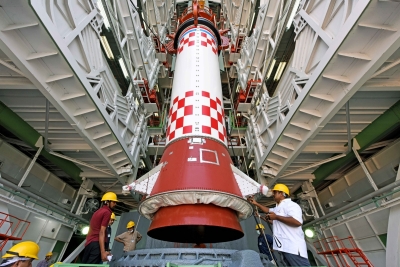 Sriharikota: The next generation maiden flight of India’s Small Satellite Launch Vehicle (SSLV-D1–developmental flight) on Sunday suffered a set back as the both the satellites–earth observation satellite EOS-02 and AzaadiSat–carried by it were placed in an elliptical orbit instead of circular orbit and the satellites were no longer usable.

Hours after the mission took place from the First Launch Pad at 0918 hrs from the SHAR Range, ISRO Chairman Dr.S.Somanath, in a video address, said the SSLV-D1, after taking off majestically and the normal performance of all the three stages, placed the satellites into 356 km x 76 km elliptical orbit instead of 356 km circular orbit – 76 km is the lowest point close to the surface of the earth.

He said when the satellites are placed in such an orbit, they will not stay there for long and will come down.

“The two satellites have already come down from that orbit and they are no longer usable,” he said. He said going forward a set of experts will look into the failure and identify why it went into an unacceptable orbit. After carrying out the small corrections and revalidation of the corrections ISRO will go for the next SSLV-D2 launch soon, Somanath added.

“Satellites are no longer usable. Issue is reasonably identified. Failure of a logic to identify a sensor failure and go for a salvage action caused the deviation”, it said.

A committee would analyse and recommend. With the implementation of the recommendations, ISRO will come back soon with SSLV-D2, it said.