"We had announced an infrastructure pipeline and that pipeline has already identified 7000 greenfield and brownfield projects. We need to have them constructed in coordination with the State governments and also with some private partnership,' the Finance Minister said. 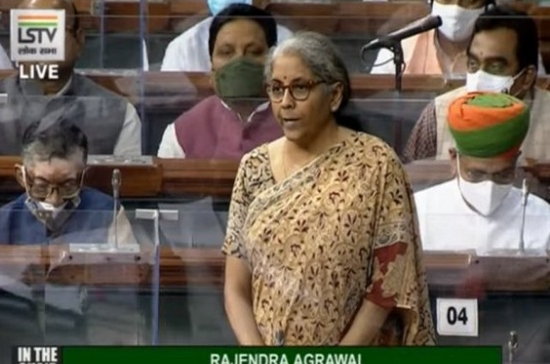 New Delhi: The Lok Sabha on Tuesday passed the all important Finance Bill, 2021 by voice vote.

Replying to the debate on the Bill to give effect to the financial proposals of the Central Government for the financial year 2021-22 contained in the general budget, Union Finance Minister Nirmala Sitharaman said there is no change in the rate of income tax.

She said there are some changes in the IT Act that is largely to do with ease of doing business.

“Until the end of August from April, we will look at rationalising the Customs structure. There are in the Finance Bill a few new proposals which have been added. One is Tax exemption for the National Bank for financing infrastructure and development, because it is an important step we are taking,” the Union Finance Minister said.

“We had announced an infrastructure pipeline and that pipeline has already identified 7000 greenfield and brownfield projects. We need to have them constructed in coordination with the State governments and also with some private partnership,’ she said.

The Finance Minister said scheduled commercial banks should not be getting into long term infrastructure funding, because that’s not core business for a bank.

She said banks should be lending short term and earn money out of it and the kind of risks that the infrastructure investment requires cannot be faced by the scheduled commercial banks.

“Therefore, there is a need to have a development finance institution for that we need to give some tax exemptions,” Sitharaman said.

The Union Finance Minister further said that GST related matters are decided by the GST Council.

“On the petrol and diesel, agriculture infrastructure development cess, questions have been raised. This cess was brought in….the customs duty was brought down, the cess was imposed. It was imposed far lesser than the quantum of reduction in Customs Duty,’ she said.

‘The principle being that eventually that particular importer of that particular product, on whom basic Customs duty was on, will end up paying that much only or lesser but never more,” the Finance Minister said.

‘It applies to only big taxpayers whose turnover is more than Rs 10 crore in the year before it was imposed last year in the Finance Act of 2020,’ she said.

“It is intended to widen the tax net. You can always adjust the tax, it is not an additional tax on Covid vaccinations, even today in government hospitals vaccination is for free, there is no burden on poor people,” she added.

‘I’m not pointing out whether one state is more or less,’ she said.

“The point is, the states also tax fuel, not just the Centre. When the Centre taxes, it’s part of the devolvable amount, not a cess. So, if I collect Rs 100 out of taxing petrol, diesel, of the Rs 100, 41 per cent goes to the states.

If there is a concern as to why they should not under GST, the issue may be taken up in the GST Council and I will be glad to discuss it, let the states come and discuss if the call has to be taken there,” the Finance Minister said.

RBI raises repo rate by 50 bps to 5.9% to control inflation