He was addressing the inaugural session of the All India Conference of Law Ministers and Secretaries at Ekta Nagar of Gujarat via video. 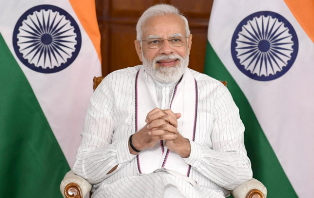 “It is important for us to break the shackles of colonialism by removing regressing colonial laws, then only India can progress in the true sense,” the Prime Minister said.

He was addressing the inaugural session of the All India Conference of Law Ministers and Secretaries at Ekta Nagar of Gujarat via video.

Modi pointed out the need for a dependable and speedy justice system for a healthy and confident society.

“Delay in justice is a subject that is one of the biggest challenges faced by the citizens of India.”

The Prime Minister said that among many efforts to ensure speedy justice for citizens, an alternate dispute resolution is also an option that can be promoted at the level of the state governments.

“It has been put to good use in the villages of India. We have to understand this system at the local level in the states. We have to work on how it can be made a part of our legal system.”

He said that many old laws from the time of slavery were still in operation in the states and urged the dignitaries to make way for the abolition of such laws.

“Our society keeps on weeding out irrelevant laws and wrong customs. Otherwise, when any tradition turns into orthodoxy, it turns out to be a burden on society,” he added.

Modi said that the people of the country should feel neither the absence of government nor the pressure of the government.

In the last eight years, India has repealed more than 1500 archaic laws and reduced more than 32,000 compliances, he said.

Putting the spotlight on the integration of technology in the judicial system, the Prime Minister pointed out the emergence of e-courts and virtual hearings and the promotion of e-filings. He further added that these systems will get a major boost with the arrival of 5G in the country.

“Every state will have to update and upgrade its systems. It should also be an important goal of our legal education to prepare it according to technology,” he added.