Leaving no stone unturned to bring back Indians: PM Modi

Today every Indian is keeping an eye on the existing global situation. India has always given a top priority to the security of it's each and every citizen 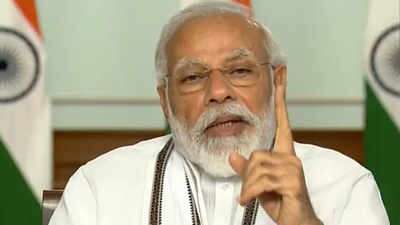 Basti (UP): Prime Minister Narendra Modi on Sunday said that the Indian government has left no stone unturned to bring back thousands of Indians from Ukraine by launching ‘Operation Ganga’.

Addressing an election rally here, Modi said, “Today every Indian is keeping an eye on the existing global situation. India has always given a top priority to the security of it’s each and every citizen. We have left no stone unturned to bring back our citizens safely wherever crisis took place. We are also bringing back thousands of Indians from Ukraine by launching ‘Operation Ganga’. The government is working day and night to bring our sons and daughters who are still there to their homes safely.”

He said that those who always ignored the needs of the forces of the nation, such dynastic politicians, can never strengthen the country.

“Hearts of those which beats for the terrorists carrying out blasts in the country they will never make the nation strong. The country will become strong only when the states become strong, when Uttar Pradesh becomes strong.” he said.

The PM said, “But these dynastic politicians have only one formula – money in the coffers of the family, law in their pocket and the public on their feet.” He said that the policies of the previous governments were such that they always insisted on importing this from foreign countries. “These people like India to remain dependent on other nations. They saw only one thing – commission and cut, therefore these people do not talk about Atamanirbhar Bharat,” he said.

He said that the dynastic politicians kept our army dependent on the foreign countries for decades. “They destroyed the defence industry of India, but now a big defence corridor is being constructed in UP,” he said. Modi said that keeping in view the interests of the cane farmers a big network of ethanol plants was being prepared by the government.

“Earlier these people only kept making sugar from the sugarcane and made such policies that sugar mills and the cane farmers, both, were forced to live on the mercy of the government. Keeping in view the interests of the cane farmers our government is preparing a big network of ethanol plant,” he said. He said that dynastic politicians who survive for the commission can never take a step in the farmers and national interest.

“They do not belong to any caste of society. For them their personal interest is supreme. They left those with whom they were roaming in 2017 and took along others in 2019. Then they left them too and came with new companions in 2022. Will you support those who leave their companions?,” he said. He said that the BJP government was empowering each and every poor by following the mantra of ‘Sabka Saath, Sabka Vikas’. “Rise above the caste and religious lines and do welfare for the poor first. We are working with this feeling,” he said.