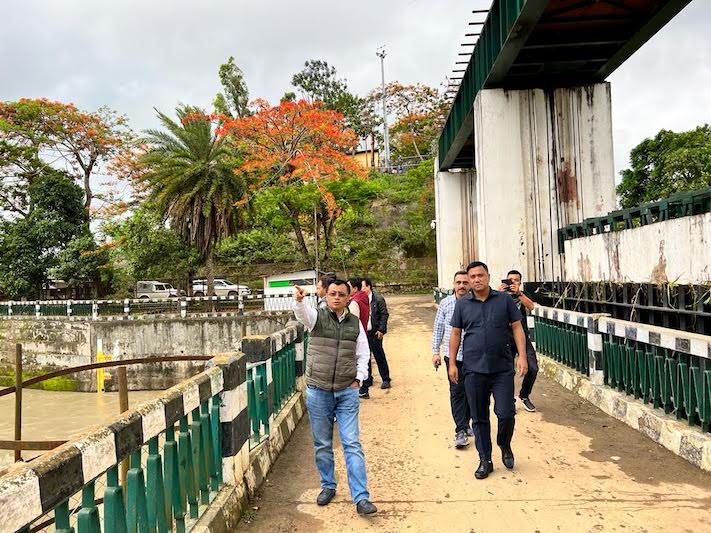 Imphal: Loktak Development Authority(LDA) Chairman M Asnikumar held a meeting with high-ranking officials of NHPC Ltd to discuss the present ecological condition of the Loktak lake and the state government’s mission to conserve the treasured Lake from further degradation on Tuesday.

The meeting resolved to regulate the Lake’s water level by opening the Ithai barrage during peak monsoon to flush out excess biomass, grass, weeds, and pollutants from the lake through Khordak and Ungamel channels.

It was also decided to help improve the sanitation of the fishing community folks who are settled in the lake by NHPC and to pay a joint visit (by LDA and NHPC officials) to the Loktak Lake area and Ithai barrage so as to assess the ground situation at the earliest.

During the meeting, NHPC assured its support and cooperation with the state government’s Loktak conservation mission.

Today, as a follow-up action of the above meeting, LDA Chairman conducted an onsite joint inspection with high-ranking NHPC officials at the sites of the Loktak project canal and the Ithai barrage.

During the inspection, an extra sluice gate of the Ithai barrage was opened up (in addition to the earlier 3 open gates) by the NHPC to aid in the flushing out of weeds, grass, excess biomass, and pollutants from the Loktak Lake.

Asnikumar also said that in coordination with all the concerned stakeholders, more follow-up actions will take place in the coming days and weeks.

Restoring the natural cycle of Loktak Lake, preserving and maintaining it for the present as well as future generations is one of the primary components of the state government’s environmental agenda under the Chief Minister’s leadership, he added.