Gadkari was in the hospital at around 9 am and soon tweeted: "Singing legend Lata Mangeshkar passes away." With this the entire nation was plunged into a sense of loss as the "nightingale", the "kokila of India" was gone forever. 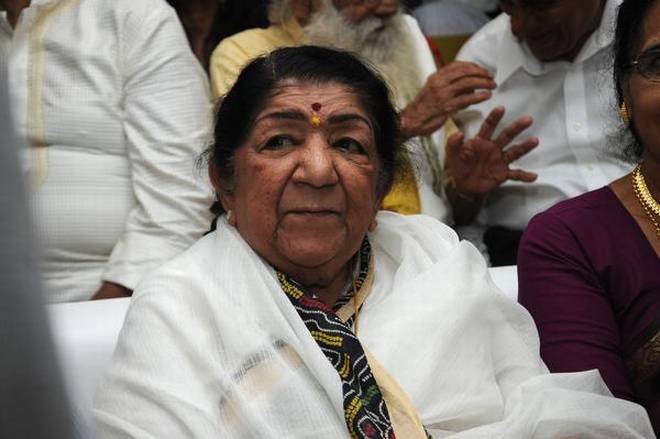 Mumbai: Legendary singer Lata Mangeshkar passed away on Sunday after battling with Covid and its complication for 28 days at a hospital here. She was 92.

National mourning of two days have been announced. Even as her “Aye Mere Watan ke logo” prayed through the night wishing for miracle, Union Minister Nitin Gadkari announced the news of her demise after visiting the Breach Candy hospital, where she was admitted.

Gadkari was in the hospital at around 9 am and soon tweeted: “Singing legend Lata Mangeshkar passes away.” With this the entire nation was plunged into a sense of loss as the “nightingale”, the “kokila of India” was gone forever.

Dr Pratit Samdani said: “She passed away at 8.12 am after multi-organ failure post Covid detection 28 days ago.” Condolences have started pouring in.

President Ram Nath Kovind said he was heart broken. “Lata-ji’s demise is heart-breaking for me, as it is for millions the world over. In her vast range of songs, rendering the essence and beauty of India, generations found expression of their inner-most emotions. A Bharat Ratna, Lata-ji’s accomplishments will remain incomparable,” Kovind tweeted.

Vice President M. Venkaiah Naidu tweeted: I am extremely saddened by the demise of Lata Mangeshkar Ji, the Nightingale of Indian Cinema and legendary singer. India has lost its voice in the death of Lata ji, who has enthralled music lovers in India & across the globe with her mellifluous & sublime voice for many decades.” Prime Minister Narendra Modi expressed his condolence and said so anguished he was that he was at a loss of words.

“I am anguished beyond words. The kind and caring Lata Didi has left us. She leaves a void in our nation that cannot be filled. The coming generations will remember her as a stalwart of Indian culture, whose melodious voice had an unparalleled ability to mesmerise people.”

The President also shared: “An artist born but once in centuries, Lata-didi was an exceptional human being, full of warmth, as I found whenever I met her. The divine voice has gone quiet forever but her melodies will remain immortal, echoing in eternity. My condolences to her family and admirers everywhere.”

India was praying for her recovery after her doctor on Saturday said an “aggressive form of treatment was being pursued. She was put on ventilator after her condition deteriorated on Saturday. Her mortal remains be kept at her residence and the funeral will be in the evening at the Shivaji Park.

“Lata Didi’s songs brought out a variety of emotions. She closely witnessed the transitions of the Indian film world for decades. Beyond films, she was always passionate about India’s growth. She always wanted to see a strong and developed India,” the PM also said.

“I consider it my honour that I have always received immense affection from Lata Didi. My interactions with her will remain unforgettable. I grieve with my fellow Indians on the passing away of Lata Didi. Spoke to her family and expressed condolences. Om Shanti,” said Modi in her message.

The legend has been admitted to Breach Candy Hospital in Mumbai after she was tested Covid-19 positive.