As the threat from the McKinney fire grew, some residents chose to stay behind while others heeded orders to leave. 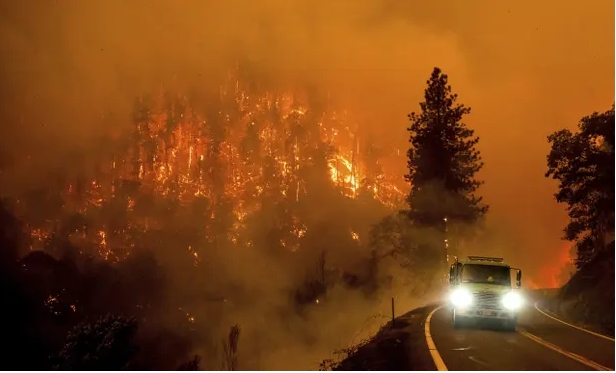 Sacramento(US): A wildfire in California grew into the largest blaze in the state so far this year, as firefighting units braced for thunderstorms and hot, windy conditions. Huge blazes are burning out of control in Montana, Idaho, and Hawaii as well.

With thunderstorms expected, the McKinney Fire burning out of control in northern California’s Klamath national forest, near the Oregon border, is a big concern, the Guardian quoted US Forest Service spokesperson Adrienne Freeman.

“The fuel beds are so dry and they can just erupt from that lightning,” Freeman said. “These thunder cells come with gusty erratic winds that can blow fire in every direction.”

The blaze exploded in size to reach more than 80 sq miles (207 sq km) by Sunday evening, just two days after erupting in a largely unpopulated area of Siskiyou county.

At least 2,000 people were ordered to evacuate. The cause of the fire was under investigation.

The blaze torched trees along California Highway 96. Thick smoke covered the area and flames burned through hillsides in sight of homes, the Guardian report said.

A second, smaller fire just to the west that was sparked by dry lightning Saturday threatened the tiny town of Seiad, Freeman said. About 400 structures were under threat from the two fires.

A third fire, which was on the southwest end of the McKinney blaze, prompted evacuation orders for about 500 homes Sunday, said Courtney Kreider, a spokesperson with the Siskiyou county sheriff’s office.

Authorities have not confirmed the extent of the damage yet, saying assessments would begin when it was safe to reach the area.

As the threat from the McKinney fire grew, some residents chose to stay behind while others heeded orders to leave.

In northwest Montana, the Elmo wildfire had grown to more than 17 sq miles within a few miles of the town of Elmo. High temperatures and erratic winds were expected, the report said.

Roughly 200 miles to the south, Idaho residents remained under evacuation orders as the Moose fire in the Salmon-Challis national forest charred more than 75 sq miles in timbered land near the town of Salmon. It was 21 percent contained Sunday morning, officials said.

In Hawaii, fire crews and helicopters fought flames Saturday evening on Maui near Paia Bay. A red flag warning was issued on Sunday.

The fires come amid scorching temperatures in the Pacific north-west.