The settlement has been closed to visitors for the last 402 days ever since the news of the COVID-19 outbreak started trickling from India. 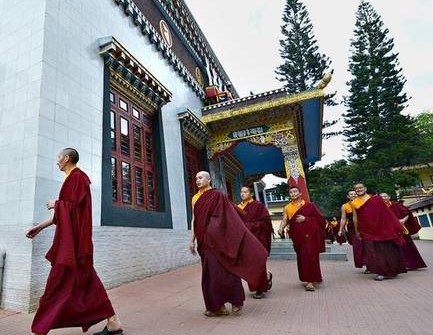 Mysuru: Despite a surge in COVID-19 cases across the country, the Bylakuppe Tibetan Settlement, located at the border of Mysuru and Kodagu districts in Karnataka has not been affected by the virus, thanks to the stringent measures taken by the people who are at the helm of monasteries.

The settlement has been closed to visitors for the last 402 days ever since the news of the COVID-19 outbreak started trickling from India. Probably following the strict protocol advice from their base camp at Dharamshala in Tibet, next to China — the world’s epicentre of the virus — the monasteries felt the need to ban the entry of outsiders into the settlement.

There are over 40,000 closely knit families of Tibetans settled at Bylakuppe and a disease of this magnitude could have spelt a disaster. Thanks to the stringent measures, there are only a handful of COVID-positive persons in the settlement and they have recuperated now. Monks have turned sticklers for rules and have fully adhered to the Government guidelines even at homes and outside.

The Bylakuppe Settlement is one of the oldest settlements in India and the camp has connections across 150 nations worldwide. All the entrances to the Tibetan Camp were declared shut and precautionary measures, including screening of monks who have come from outside the camp, have been in force since January last year.

Notably, the public celebration of Tibetan New Year called ‘Losar’ that is usually celebrated across Bylakuppe on a grand scale was also not held due to the pandemic. Celebrations were strictly within the community and at homes. Tibetans are settled across 15 camps in Bylakuppe and the monastery management is ensuring safety of all with frequent communication, awareness and also targeted management.

Monk authorities said that the entry ban will continue till normalcy returns. As part of the COVID unlock system adopted last year, the Centre and State Governments relaxed lockdown norms in phases bringing normalcy. But monk heads and administrators decided to keep the monasteries closed and not even a single visitor from outside was allowed.

The orders banning outside visitors was issued by Buddhist Monks Charitable Trust and also restricted the monks from moving around on the premises. Though the Trust had made up its mind to open the monasteries, the plans were shelved as the second wave had hit in a deadlier format.

Even when the Government decided to throw open the tourism sector, the monk authorities did not relent and kept the gates closed. Bylakuppe is one of the must-visit tourist destinations in Kodagu and the monasteries, Golden Temple and other imposing structures are always present in the tourist itinerary.

Since last January, however, the gates were closed and whichever tourist who came to Bylakuppe had to return disappointed. Notably, even VIP visits were discouraged and the monk diktat prevailed.