World indoor champion Gudaf Tsegay of Ethiopia took the silver with 3:54.52, upgrading from the bronze she won in 2019. 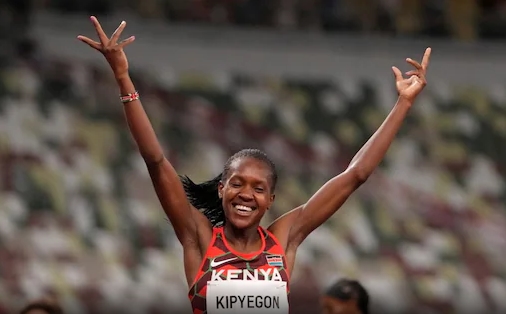 Kipyegon clocked 3:52.96 on the same Hayward Field track on Monday, the second-fastest time on US soil after her own 3:52.59 at the Prefontaine Classic in May, to regain the world title that she first won in 2017. She claimed an unprecedented fourth medal in the event.

“I was facing a lot of pressure,” said Kipyegon. “Everybody was expecting something special from me. Everybody was like, ‘Faith, we believe in Faith,’ so it was real pressure. But I managed it. I’m so grateful to have won the gold medal. This was my big target. I did do it. I was really looking forward to this championship.”

World indoor champion Gudaf Tsegay of Ethiopia took the silver with 3:54.52, upgrading from the bronze she won in 2019.

Great Britain’s Laura Muir, in her fifth World Championships final, at last, secured a medal, claiming the bronze with a season’s best of 3:55.28.
Muir, 29, finished six seconds ahead of Ethiopia’s Freweyni Hailu, the largest gap in World Championships history between third and fourth.