The Smart Cities Mission is a centrally sponsored scheme with a 50:50 contribution between the Government of India and the States. 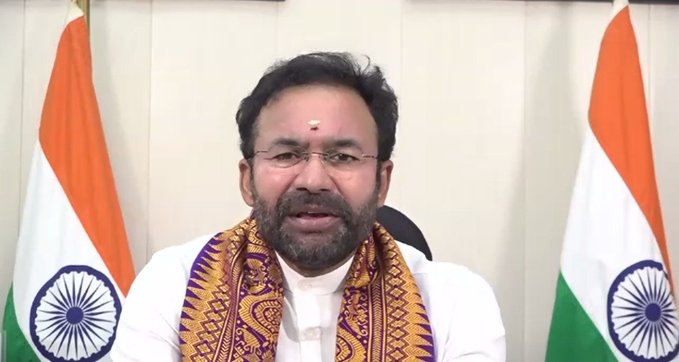 Hyderabad: Union Tourism Minister G Kishan Reddy on Wednesday alleged that the Kalavakuntala family of Chief Minister K. Chandrashekar Rao deliberately propagates misinformation and lies through social media on the release of funds by the Centre for smart cities in Telangana.

However, when one ascertains the facts, it becomes clear that this blame should squarely lie on the government which did not allocate its share as a part of the matching grant for the Smart Cities projects in the state, Kishan Reddy said in a statement here.

Apart from the Smart Cities Mission, the Union government has allocated Rs. 2,780 crores under Atal Mission for Rejuvenation and Urban Transformation (AMRUT) 2.0, while 66 projects worth Rs. 1,660 crores were a part of the approved plan for the first phase of ARMUT covering 12 cities in Telangana, Reddy said.

He said this further becomes evident as the Telangana Rashtra Samiti (TRS) government had falsely claimed that the Government of India did not release “even 1 rupee” in the last 3 years for Smart Cities in Telangana.

The Telangana State has been allocated two Smart cities under the National Competitive Smart Cities Challenge Warangal was selected in May 2016 and Karimnagar through Round 3 in June 2017.

The Smart Cities Mission is a centrally sponsored scheme with a 50:50 contribution between the Government of India and the States.

Warangal has utilized all funds made available by the Centre, however, the condition of the equal contribution of state share has not been met, the Minister said.

Even Rs 196 crore released by the Central government was not released to the smart city immediately but after a lag, therefore diverting the money for other uses before finally transferring to Warangal, Reddy alleged.

He said, apart from this, an additional Rs 32 crore has been released for five Heritage city projects in Warangal.

Similarly, Karimnagar has not received the full state matching grant share of Rs 196 crore, the Minister also alleged and said that Karimnagar too has utilized all its funds released by the Union government.

Therefore, the Kalavakuntala family is better advised to focus on the government of Telangana and the allocations be made rather than blame the Government of India, he added.