Journalist died of COVID in Tripura

It was the second death case of journalist due to Covid-19 in six months. 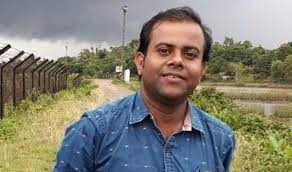 Agartala: A 39-year-old journalist Tanmoy Chakraborty working with a local digital news channel passed away due to COVID-19 in a private hospital, here on Sunday night.

He has been suffering from liver related disease for the past many years but after getting infected with Covid-19, his health deteriorated. Although he had a serious liver problem, Tanmoy was an active working journalist of the state for past one and half decades.

It was the second death case of journalist due to Covid-19 in six months.

Three days ago, he was discharged from the Covid hospital but after reaching home, he had developed respiratory complications. At night, he had been shifted to a private hospital and soon after he was put on ventilation. Tanmoy breathed his last night around 2020 hrs.

He is survived by his old parents, wife and five years old daughter in the family. Tanmoy was a PhD scholar of Mass Communication in Assam University and he was about to be awarded the degree.

The Chief Minister Biplab Kumar Deb made arrangement of bringing out the body from the hospital and announced that the state government would bear all of his hospital expenses following the request of the apex body of media – Assembly of Journalists’.

Deb expressed condolence to the bereaved family and assured to stand with them in future too.

Earlier in October last year, Covid had claimed the life of 46 –yrs old television journalist Jitendra Debbarma of a local Kokborok (tribal dialect) language channel. According to the government decision, Jitendra’s family is eligible for getting Rs 10 Lakh compensation, which they are yet to get.