JK Tyre National Racing Round-2 this weekend at Coimbatore

Over 100 seasoned and rookie racers will race around the challenging 2.1-km long layout as they battle for top honors across four categories that make up India’s most coveted racing championship. 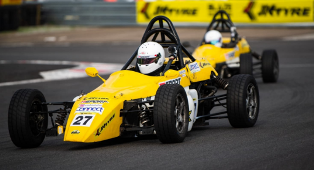 Coimbatore: The 25th JK Tyre FMSCI National Racing Championship will return for the second round of its silver jubilee season on October 29 and 30whch promises to be an action-packed weekend of high-octane thrills at Kari Motor speedway here.

Over 100 seasoned and rookie racers will race around the challenging 2.1-km long layout as they battle for top honours across four categories that make up India’s most coveted racing championship.

But, despite their imperious showing, they can expect to face stiff competition fromAhura Racing’s seasoned campaigners Amir Sayed and Diljith T S, and their team mate Viswas Vijayaraj, with the latter the only driver to break Dark Don’s stranglehold on the podium with a second-place finish in the second race of the season-opening round.

The LGB Formula-4 field will also feature a slightly different look this weekend with MSport racer Ruhaan Alva, the reigning Novice Cup champion, set to miss the weekend as he is competing in the World Motorsport Games in Marseille.

The JK Tyre presents Royal Enfield Continental GT Cup could throw up some surprises if last month’s opening round is anything to go by. The category, which runs to the Pro-Am format, features a field of 25 riders.

Last year’s defending champion Anish Damodara Shetty (20 points) and Allwin Xaviermade a strong start to their campaign at last month’s season-opening round and are among the favourites this weekend. But they could face a challenger in the form of amateur racer Soorya PM, with Navaneeth Kumar, Ullas S Nanda, and Sudheer Sudhakar, also expected to up the ante this weekend.

The season-opening round of the 2022 season, also saw the introduction of the all-new JK Tyre Endurance League Cup powered by CRA. The category features 20 teams of two riders each racing on 250cc bikes non-stop for 60 minutes with a rider change is a true test of endurance.

This is another category that could be full of surprises with 12-year-old FIM Mini GP champion Shreyas Hareesh to be in contention and the all-girls team of Rakshitha and Czmikhy set to give a tough fight to the boys in the grid.

With high-octane action lined up, this weekend is going to be full of excitement as the championship is expected to go down to the wire.