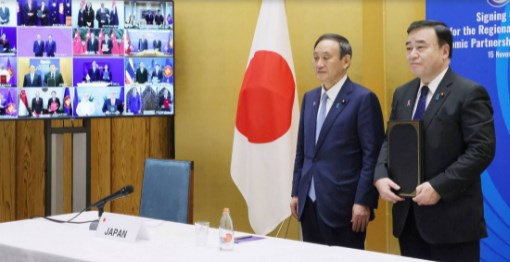 The House of Representatives, the lower house of the parliament gave its approval earlier this month.

The deal was signed by China, Japan, South Korea, Australia, New Zealand and the 10 members of ASEAN in November 2020.

The pact will enter into force 60 days after it is ratified by six of the ASEAN members and three non-ASEAN countries.

China, Singapore and Thailand have completed procedures for ratification as of Wednesday.

China, the world’s second-largest economy, completed the procedures for ratification on April 15 this year, and approved the ratification of the RCEP agreement on March 22, according to the ministry of commerce.

China’s commerce ministry, in addition, has said that all RCEP signatories have expressed their intentions and will strive to complete the ratification process within the year so as to see its enactment by Jan. 1, 2022.

Once in effect, the deal will eliminate tariffs on as much as 90 percent of goods traded between its signatories over the next 20 years.

The deal will also standardize rules on investment and intellectual property to promote free trade among its signatories.

As for Japan, the government said on March 19 that the RCEP accord will boost the country’s GDP by 2.7 percent.

In the country’s first publicized estimate on the impact of the trade deal, the government also expected some 570,000 jobs to be created.

India’s merchandise export in September down by 3.42%