James Khangenbam is an independent documentary filmmaker based in Imphal, India. He works as producer and director for his documentary films. He studied literature and Journalism. 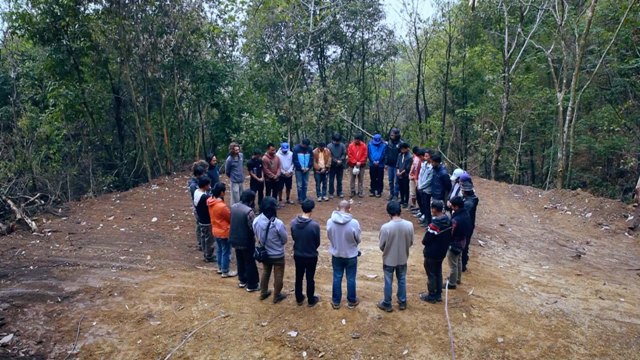 Imphal: James Khangembam’s debut documentary film – Meiram-The Fireline is among 18 films selected in the Competition Short Documentary section of the 14th International Documentary and Short Film Festival of Kerala (IDSFFK) 2022 to be held from August 26 to 31 in Thiruvananthapuram.

It is a 33-minute documentary film on forest conservation at the Punsilok area of the  Langol hills started by Loiya Moirangthem and his group of friends. The film visually touches the embracing colours of wild and slices of biodiversity. The film is produced by James Khangembam who also handles the camera. Mocha Kangjam is the sound designer whose work revolves around the moving environment and nature. Johni Meitei is the editor.

James Khangembam said, “My film is an observational documentary. When one sees my film, one would feel like he or she is in the forest. The peaceful co-existence of birds, insects, animals and man in a given space is highlighted in the film. My film also generates a sense of volunteerism towards conserving a forest ”

He stated, “I started the filming in 2017 and completed it in 2020. I shot all the seasons like summer, winter, autumn and spring. I took around one and half years in post-production”.

He further said,”The annual fireline is made in winter before the onset of the windy season. Fireline is a controlled fire to clear narrow strips of land at the periphery of the forest. The volunteers manually remove the overgrown shrubs and larger plants, and when the fallen shrubs are dry they burn them at night when the wind is stable to avoid the accidental spread of fire. The gap is made to stop the unpredictable wild forest fire from crossing into the conservation site during the windy season. The fireline is made annually as the cleared strip of land regenerates during the rainy season.”

James Khangenbam is an independent documentary filmmaker based in Imphal, India. He works as producer and director for his documentary films. He studied literature and Journalism. A former journalist in the print, web and television in his hometown, he has been attending documentary film project development workshops at Docedge Kolkata, Imphal Documentor, for the last 6 years.

The International Documentary and Short Film Festival of Kerala has over the years evolved into the key platform for non-fiction filmmaking in the country, organised by the Kerala State Chalachitra Academy for the Department of Cultural Affairs, Government of Kerala as part of its endeavour to catalyse a vibrant documentary and short film movement. Increasing accessibility and affordability of media technology has led to a boom in the production and scope of films.