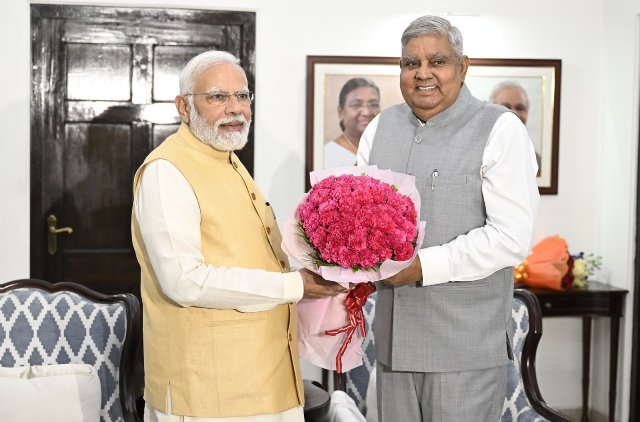 The returning officer of the vice presidential election said of the total 780 electors, 725 cast their ballots but 15 votes were found to be invalid. The turnout was 92.94 per cent, he said, adding that a candidate needed 356 votes to get elected.

Out of the total valid votes, Dhankar got 528 votes in which he was marked the first preference, while Alva got 128.

The Trinamool Congress, which has a total of 36 MPs, including 23 in Lok Sabha, had abstained from the election. However, two of its MPs had cast their ballots.

Margaret Alva congratulated Mr Dhankhar on the win. She also thanked leaders of the Opposition, and MPs from across parties who voted for her in this election. “This election is over. The battle for protecting our Constitution, strengthening our democracy & restoring the dignity of Parliament, will continue,” she said.

Prime Minister Narendra Modi, along with BJP chief JP Nadda, went to congratulate Mr Dhankhar on on his election as the Vice President. Mr Dhankhar, a Jat, was born in 1951 into a farmer’s family in a small village in Rajasthan.

Dhankar will succeed M Venkaiah Naidu as the 14th Vice President of India. With agency inputs