‘Jaffna not a city in the south of any other country’, says Chinese envoy, in reference to India

Ambassador Qi visited Jaffna’s Point Pedro, the northernmost end of Sri Lanka, and Mannar from where a land bridge is thought to have existed at one time to Rameswaram in India. 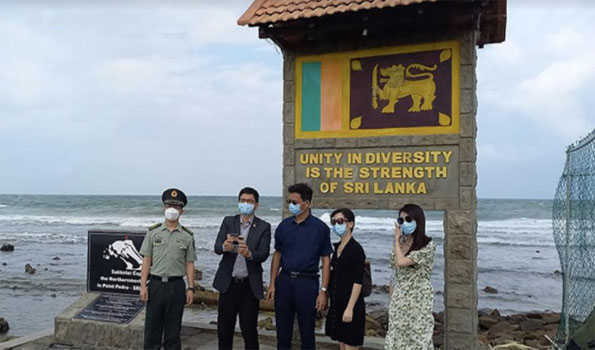 Colombo: China’s Ambassador to Colombo, Qi Zhenhong, who raised eyebrows on his recent visit to Jaffna’s Point Pedro, Sri Lanka’s northernmost point overlooking India, has said that the Tamil-dominated region is part of Sri Lanka and was “not a city in the south of any other country” – in an apparent reference to India.

Ambassador Qi visited Jaffna’s Point Pedro, the northernmost end of Sri Lanka, and Mannar from where a land bridge is thought to have existed at one time to Rameswaram in India.

“Jaffna is a city in Sri Lanka in the north of the island. It is not a city in the south of any other country,” Qi Zhenhong said when he was asked about his visit to Jaffna and his message to Jaffna people.

His visit last month to the northern province had come against the backdrop of Sri Lanka suspending Chinese power projects in three islands off Jaffna after India had raised security concerns, government officials have said.

Qi Zhenhong’s visit to Jaffna had raised concerns as he distributed compensation for Sri Lanka’s northern fishermen who had been facing a lack of fish catch mainly due to Indian bottom trawling.

Some observers had characterized the visit as “provocative”, economynext.com said.

China had been eyeing infrastructure projects in Sri Lanka’s war-torn north and east, but it hardly got any because of India’s dominant role in the region, Sri Lankan government officials have said.

“I know that it is a very important city in the north. It is a city of minority ethnicity and also after almost the end of three decades of war,” Qi Zhenhong said.

“It is a very simple and open visit without any private or hidden agenda,” he claimed.

During his trip to the northern most point, Sakkotai Cape in Point Pedro overlooking India on December 15-16, the Chinese envoy had asked officials accompanying him what was the distance from that point to India, to which he was told it was 30 km,

The Chinese envoy also visited historic Nallur Kovil and pointedly participated in Hindu religious rituals, bare-bodied and wearing the traditional vetti in accordance with local Tamil custom. All these actions made for good optics and were seen as an excellent example of public diplomacy.

He had what was described as “a fruitful meeting” with the governor of the Northern Province, Jeewan Thiyagarajah, at the Governor’s Residence on the evening of December 15.

He also donated five ROI (water purification) mobile plants to the province, one unit for each district. The high-quality ROI mobile plants will provide fresh water to thousands of people in various areas. Drinking water is a pressing issue in Jaffna peninsula.

The visit had come in the backdrop of Colombo terminating a Chinese project to build wind power plants on three Jaffna islets, and instead giving those to India. However, China moved the power plant project to the Maldives, stating that it would be Sri Lanka’s loss.

A Chinese company Sinosoar-Etechwin Joint Venture, had won the project to build power projects in three northern islands – Delft, Analativu, and Nainativu islands. The project company could not proceed with the project since Sri Lanka suspended it following a request by India citing security concerns.

Wonder Years returns to the small screen with a Black cast