The eighth-round match was played at Toto Turner Stadium in the southern city of Beer Sheva in front of 9,000 fans. 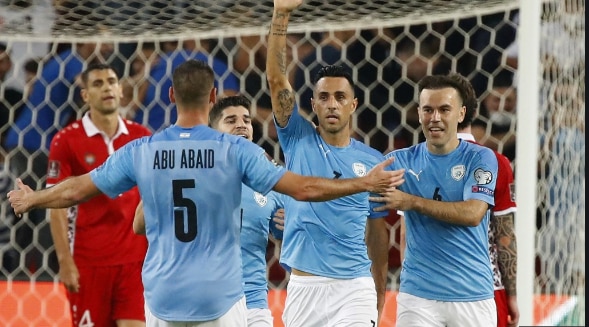 The eighth-round match was played at Toto Turner Stadium in the southern city of Beer Sheva in front of 9,000 fans.

PSV Eindhoven striker Eran Zahavi, the two-time top scorer of the Chinese Super League, found the net in the 28th minute after an accurate pass by Manor Solomon.

Zahavi thus became the all-time top scorer of the Israeli national team, reaching 33 goals in the blue and white outfit.

Zahavi also provided a nice pass to striker Munas Dabbur in the 49th minute, who made it 2-0 for Israel.

The Moldavians were left with 10 players in the 85th minute, as defender Oleg Reabciuk was sent off with a second yellow card, but they were able to score in the final seconds, from a header by Ion Nicolaescu.

Denmark, who beat Austria 1-0, currently holds a perfect record of 24 points in the group, securing a spot in the World Cup tournament to be held in November-December 2022 in Qatar.

The second place, which leads to the playoffs, is currently held by Scotland, who rose to 17 points after a 1-0 away win over the Faroe Islands.

Isreal stands in third on 13 points while Austria is in fourth place with 10 points, followed by the Faroe Islands’s 4 and Moldova’s 1.

Israel will play its next match in Austria, while Moldova will host Scotland and Denmark will face the Faroe Islands, with all three matches to be played on November 12.