Bengaluru had their first chance of the evening when Namgyal Bhutia found himself free down the right flank, but his cross was wayward and couldn’t find a teammate. 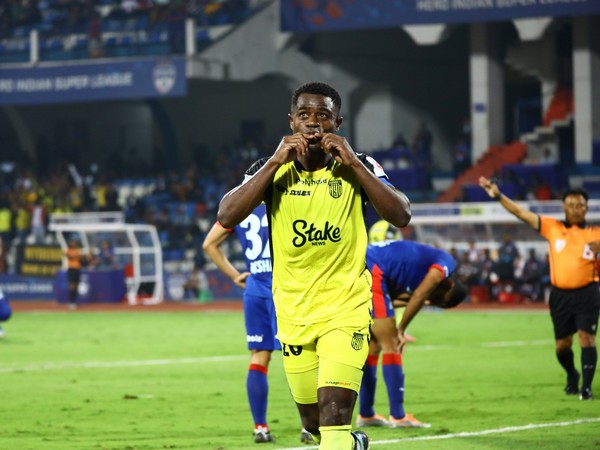 Bengaluru:Bengaluru FC began the second half of their Indian Super League(ISL) campaign with a forgettable 3-0 loss to Hyderabad FC at the Sree Kanteerava Stadium, in Bengaluru, on Friday. Goals on either side of the break from Bartholomew Ogbeche (26’, 44’) and Joel Chianese (90’) meant a third defeat of the season at home for Simon Grayson’s Blues.

Earlier, Grayson rolled an unchanged side from the one that ran out winners against Jamshedpur FC at the Kanteerava on Saturday, while Hyderabad began with Bartholomew Ogbeche, Javier Siverio and Rohit Danu in attack. The Blues welcomed Udanta Singh back to the fold, as the winger returned from injury to make the bench.

Bengaluru had their first chance of the evening when Namgyal Bhutia found himself free down the right flank, but his cross was wayward and couldn’t find a teammate. The Blues were pegged back in the 26th minute when a set-piece routine saw Halicharan Narzary lay it off for Ogbeche to strike past Gurpreet and into the back of the net off the upright.

The Blues looked to find their way back into the game and came closest from a set-piece of their own, but Chhetri’s take saw Parag nod his header wayward. Moments from the break, Hyderabad doubled their lead against the run of play when Parag was caught in possession, allowing Narzary to swing in a cross that Ogbeche would head down into the goal, despite Jhingan’s best efforts to clear.

Bengaluru came close to restoring parity when Suresh found Chhetri at the back-stick and clear in added time, but Gurmeet came out and made himself big to deny the Blues’ skipper. Grayson rang in three changes at the break, as Aleksandar Jovanovic, Naorem Roshan Singh and Danish Farooq were replaced by Pablo Perez, Alan Costa and Udanta.

Into the second period, Bengaluru attacked with added intent with Pérez and Javi pulling the string in midfield. A fourth change of the evening came as Prabir Das replaced Parag Shrivas. Grayson’s men made all the right noises, but lacked the finishing touch as Hyderabad continued to thwart. The visitors added a third against the run of play when, following Krishna’s effort at the other end, substitute Joel Chianese turned home a cross from Abdul Rabeeh to make it 3-0.

The Blues travel to Kolkata next, where a clash against East Bengal awaits on December 30th.