Ireland script upset win,beat Eng by 5 runs as per DLS

England finished at 105/5 in 14.3 overs, falling short by 5 runs as per DLS, while chasing 158 runs target set by Ireland after they sent them in to bat first. 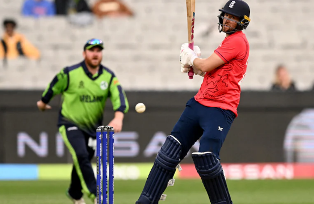 Melbourne: Ireland scripted an upset win, beating a formidable England by 5 runs as per DLS in a rain-hit World Cup T20 match here at the Melbourne Cricket Ground here on Wednesday.

England finished at 105/5 in 14.3 overs, falling short by 5 runs as per DLS, while chasing 158 runs target set by Ireland after they sent them in to bat first.

This is a massive result as it throws Super12 Group 1 wide open and makes the next England-Australia encounter that exciting in the group of death.

Ireland began nicely by taking on England quickies after Captain Andrew Balbirnie (62 off 47) and Lorcan Tucker (34 off 27) put on 82 runs partnership for the second wicket, taking the score to 103 in 12 overs after losing Paul Stirling (14 off 5) on 21.

Though Ireland lost their way towards the end by losing 8 wickets after adding just 54 runs, Balbirnie and company put up a good total of 157 all out on a big ground.

Joshua Little (2/16) gave Ireland a perfect start by sending back openers – the dangerous Jos Buttler (0) and Alex Hales (7) in his first two overs, while Fionn Hand (1/17) bowled a peach of a delivery to scalp Ben Stokes.

Dawid Malan (35 off 37) and Harry Brook (18 off 21) tried to up the ante but failed. It was then left for Moeen Ali (24 no off 12) to do it, and he succeeded in striking two meaty blows before the rain made its way prompting the umpires to call for covers.

Since the match was hampered by a couple of delays at the start, there wasn’t enough time to get the game restarted, which left Ireland winning the match as per DLS.